The Old Tribes of Ireland From after the Biblical Flood

The Old Tribes of Ireland From after the Biblical Flood Ogma ~ The god of eloquence and learning, inventor of the Ogham alphabet. (Pronounced OM)

This is a very abbreviated summary of the ''pseudo-history'' of the Invasions of Ireland. Much of it is allegorical. Named after the Greek King Partholon.  Said to have 24 males and 24 females who landed on May Day, settled and ''expanded'' the land, presumably by cultivation. They lived in Ireland for 300 years, became a population of 5000, and then were all wiped out in a plague in the course of one week.

It is said Partholon was a great-grandson of Noah.  One man, Tuan Mac Cairrell, survived to tell the tale of the Partolonians. He went through many transmigrations as animals,

Finian questioned Tuan and Tuan told his story of how he had become a stag, a boar, a salmon and a hawk/eagle. During these incarnations he witnessed the various Invasions of the land by new tribes. This tribe arrived 30 years after the extinction of the Tribe of Partholon. Nemed was also associated with Noah. His wife was Macha, one of the early Earth Goddesses.  Nemed and his clan had to fight many battles with a dark tribe known as the Formorians, variously described as pirates, or as the dark forces of the earth.  Some describe them as one-eyed, one-legged Giants who lived on the northern island of Tory and who persecuted the Nemedians for all of their occupation of Ireland. For example the Formorians insisted that the Nemedians deliver for sacrifice two thirds of the children born in any given year.

Nemed means ''holy person''. Mide, the chief Druid of the Nemedians, lit the first holy fire on the Hill of Uisneach, a place that is known to this day as the sacred heart-land of Ireland. They further advanced agriculture and working with metals, and developed trade abroad. The Nemedians eventually left after a grave defeat which left their tribe decimated,  and they settled in places like Scotland and Greece. It was some of these Greek descendants that returned to Ireland later as the Fir Bolg (the men of the Bag, so named because they carried animal bladders). They were led by Semian.  A further group of Nemed's descendants would later also return as the famed godly race known as Tuatha de Danann. They were led by Beothach. The Fir Bolg, survivors of the wars between the Formorian Giants and the Nemedians were enslaved by the Greeks for several hundred years, but they eventually built themselves up again as a tribe and left to return to Ireland. They only lasted four decades ruling Ireland before the arrival of the Tuatha de Danann. When they are defeated by the Tuatha at the great Battle of Moytura they are offered one quarter of the land, in Connaught, the most westerly quarter, which is more barren and undeveloped. Thereafter they disappear in the myths.  The later tribes regarded the Fir Bolg as somehow diabolical and uncouth. They were often depicted as swarthy, small, peasants, who were uncultured. They were known for their bad temper and aggressive ways. But they were very hard-working. This tribe provides the names of the best known Irish gods and goddesses in the Celtic Pantheon. They are said to have come out of the mysterious North (to where they had fled as defeated Nemedians) and to have been tall and fair-skinned. They were skilled in poetry and magic. They lived in four great cities called Findias, Gorias, Murias and Falias, where they studied their many skills. From Findias came the magic sword of Nuada, which could never be defeated in battle. From Gorias came Lugh's spear, which was likewise indefatigable. From Murias came the Dagda's great cauldron which was never empty of food, and from Falias came the fabled Lia Fail or Stone of Destiny which would cry out when stood upon by the True King. (Stone of Scone? Holy Grail? Who knows?)

They were also said to have descended from the sky in a dense mist. They sent fiery showers down upon the Fir Bolg who had to go underground for 3 days and 3 nights. In the battle between he Tuatha de Danann and the Fir Bolg, Nuada, king of de Danann, had his hand cut off and later it was replaced with a silver hand.  Diancecht was the famous physician of the Tuatha de Danann who made this impressive hand, apparently with movable joints. Diancecht had the help of the magical blacksmith Goibniu in this task.

However a king must be without blemish and thus Nuada had to be replaced.  Bres was chosen. He was the son of Eriu, but was unsuited to kingship. He forced two of the most noble Tuatha de Danann  -the great gods Dagda and Ogma - to do manual labour.  Eventually he was deposed by the will of the people and Nuada of the silver hand was reinstated. However Bres then made an alliance with the dark Formorians and battles resumed between the dark and light gods. The Formorians had Balor, the one-eyed giant on their side.  The Tuatha de Danann were in need of a hero to save them

The hero was born in the form of the solar god Lugh, whose name means Light.  He was known as Lugh Ioldanach, which means master of all trades. He eventually led the Tuatha de danann to victory and became High King. The Tuatha de Danann thus reigned until the coming of the Milesians, the sons of Mil, from Scythia via Egypt. They came to avenge the death of their father by the Danann kings. They were given permission to land by the wives of the murderous kings; these women were Banba, Eriu and Fodla, which are traditionally old poetic names of Ireland.  Most notable among the Milesians was their great poet Amergin, who fought against a magical wave the de Danann had conjured to prevent the Milesians landing. To break the spell he sang…

I am a stag: of seven tines,

I am a flood: across a plain,

I am a tear: the Sun lets fall,

I am a hawk: above the cliff,

I am a thorn: beneath the nail,

I am a wonder: among flowers,

I am a wizard: who but I

I am a spear: that roars for blood,

I am a lure: from paradise,

I am a hill: where poets walk,

I am a boar: ruthless and red,

I am a breaker: threatening doom,

I am a tide: that drags to death,

I am an infant: who but I

Peeps from the unhewn dolmen, arch?

I am the womb: of every holt,

I am the blaze: on every hill,

I am the queen: of every hive,

I am the shield: for every head,

I am the tomb: of every hope After their defeat by the Milesians, the Tuatha de Danann became invisible and immortal, retreating to become the magical Sidhe. Or fairy folk.

Some of the gods and goddesses of the Tuatha de Danann ~

Aenghus ~ the beautiful god of Love

Cian  ~ the father of Lugh

Dagda ~ known as ''the good god'', the father figure and protector.

Goibniu ~ the skilled and magical smith

Aine ~ the goddess of Summer

Anann ~ associated with the Morrigan, the goddess of the battle field and death

Brigit ~ goddess of fire and inspiration 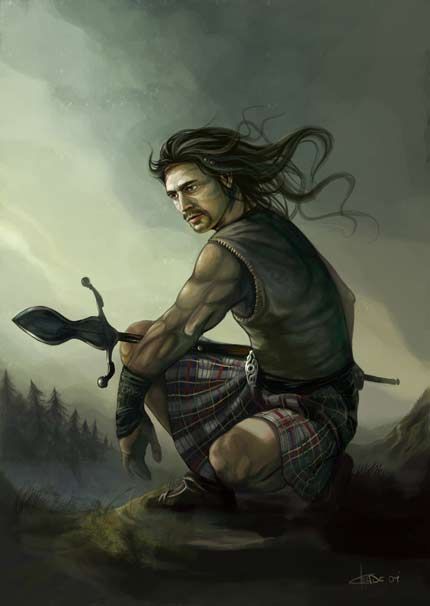