Have you ever gone looking for a book on a shelf where you know you left it — but it’s not there? Someone borrowed it and forgot to return it, or someone left it in the kitchen or the guest room, or someone just walked off with it. Well, imagine that book is a five hundred-year-old illuminated manuscript or a Bible printed in the first years of moveable type. This gives you an idea of the problems people in charge of libraries in the late middle ages were up against, and the solution they devised was ingenious. 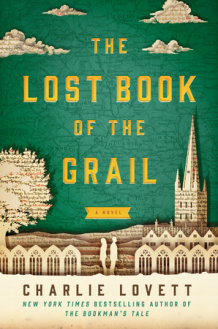 The Lost Book of the Grail

Many of the largest and most important book collections in this period were in religious foundations — in England, this meant cathedrals. Before the latter part of the middle ages, books might be scattered all around — service books inside the church, books for study and prayer in the clergy’s lodgings, and some valuable books in the treasury or secured in chests. But gradually the idea of a single room for all the books began to take hold, and the concept of the library evolved. Once the books had been gathered into a single place the question became how to keep them there.

The answer was simple — chain the books to the shelves. And thus, the chained library was invented. When I began to work on my novel The Lost Book of the Grail, I knew it would be set in a cathedral library, so I traveled to Hereford Cathedral, where the largest surviving chained library in the world is housed. As soon as I walked into the room, I knew I wanted a chained library to feature in my book.

The chained library in Hereford dated from 1611, though many of the books are much older than that (the earliest is an eighth century Gospel). Prior to the invention of the printing press, when book collections were relatively small, books were generally stored on their sides. But with the advent of printed books and the rapid expansion of collections, stacks of books became tall, and accessing the books at the bottom of the pile difficult. In a chained library, however, books were stored upright — in some cases for the first time. Chains were attached to the volumes usually at one of the outer corners of the cover. This put minimal stress on the binding, but it also meant that, in order to avoid tangling the chains, books needed to be shelved spine inwards­—backwards from how we shelve them. For this reason, the titles were sometimes written on the fore-edges of the books.

As I walked the central aisle of Hereford’s chained library, I saw many such titles, written on the edge of the text block by some priest or scholar hundreds of years ago. Hereford has eight bookcases that made up the original chained library—six double sided and two single sided. Hereford’s bookcases are “three deckers.” This means that they have three shelves of books, each holding a hundred books or more. Below the bottom shelf is a ledge on which books can be placed for study. In this way readers can consult the books without removing the chains.

While one end of the chain is attached to the book, the other end is generally, as at Hereford, attached to a metal hoop through which passes a bar that is locked to the bookcase. If a need arises to take the book from the library, this bar can be unlocked, and slid out so that the chain (and the book attached to it) can be removed.

Hereford’s library was built in the Lady Chapel and it remained there for over two hundred years, surviving the ravages of the English Civil War. But in the early nineteenth century, the chained library was considered an anachronism, and the cases were dismantled and put into storage. They were rescued in 1855 and incorrectly assembled in a new space. Not until the early 1930s did a canon of the cathedral discover how to properly assemble the chained library, but there was no space for all the cases. In 1996 a new library building was constructed, with space to completely reassemble the 1611 library.

The library is a marvel of ingenuity, and standing in that space one can almost imagine the ghostly rattling of chains as, for over two hundred years, priests and scholars consulted the books.

When I visited Hereford, I had recently been to Coventry—a completely different sort of cathedral. The medieval cathedral at Coventry was destroyed by Nazi bombs on November 14, 1940. The few remaining ruins are now a shrine to peace standing beside a modern cathedral built after the war. What if, I thought, while bombs fell on (or near) a medieval cathedral, members of the community tried to empty the books from the library in order to protect them? And what if some of those books were chained in place, the keys to their release unavailable? In this way my visits to Coventry and Hereford inspired the first scene of The Lost Book of the Grail. But the chained library of Hereford would provide me not with just a dramatic opening scene, but with an ancient element of cathedral libraries that I could weave throughout my story.