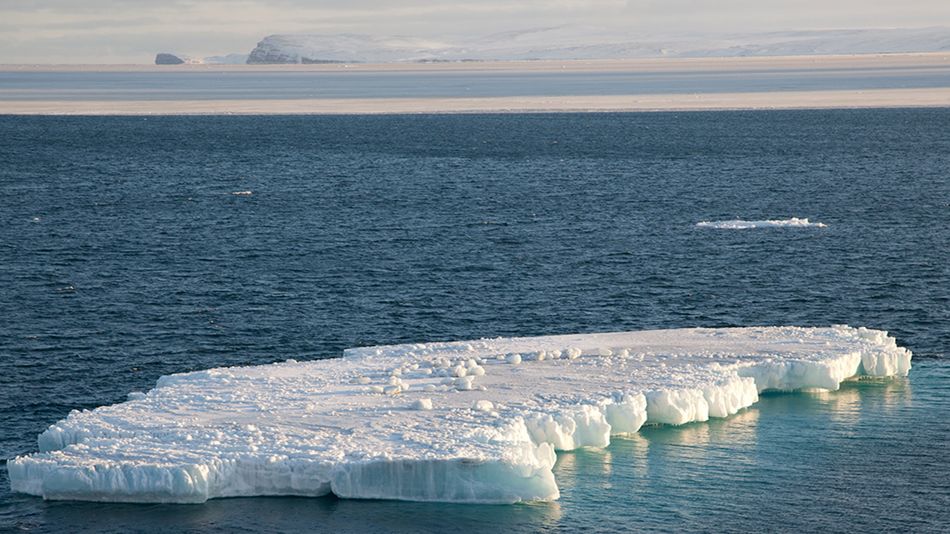 The most rapidly changing state in the U.S. has no sea ice within some 150 miles of its shores, according to high-resolution sea ice analysis from the National Weather Service. The big picture is clear: After an Arctic summer with well above-average temperatures, warmer seas, and a historic July heat wave, sea ice has vanished in Alaskan waters.

"Alaska waters are ice free," said Rick Thoman, a climate specialist at the Alaska Center for Climate Assessment and Policy.

"This is definitely an extreme year — even by more recent standards in a changed Arctic," noted Walt Walt Meier, a senior research scientist at the National Snow and Ice Data Center.

In the continually warming Arctic, sea ice has completely melted around the Alaskan coast before, notably during 2017's melt season, but never this early. "It's cleared earlier than it has in any other year," said Thoman. (Sea ice starts regrowing again in the fall, when temperatures drop.)

Arctic sea ice has been either been at record lows or flirting with record lows throughout much of the summer. "I’m losing the ability to communicate the magnitude [of change]," Jeremy Mathis, a longtime Arctic researcher and current board director at the National Academies of Sciences, told Mashable in June, when sea ice levels were at their lowest point in the satellite record for that period. "I’m running out of adjectives to describe the scope of change we’re seeing." 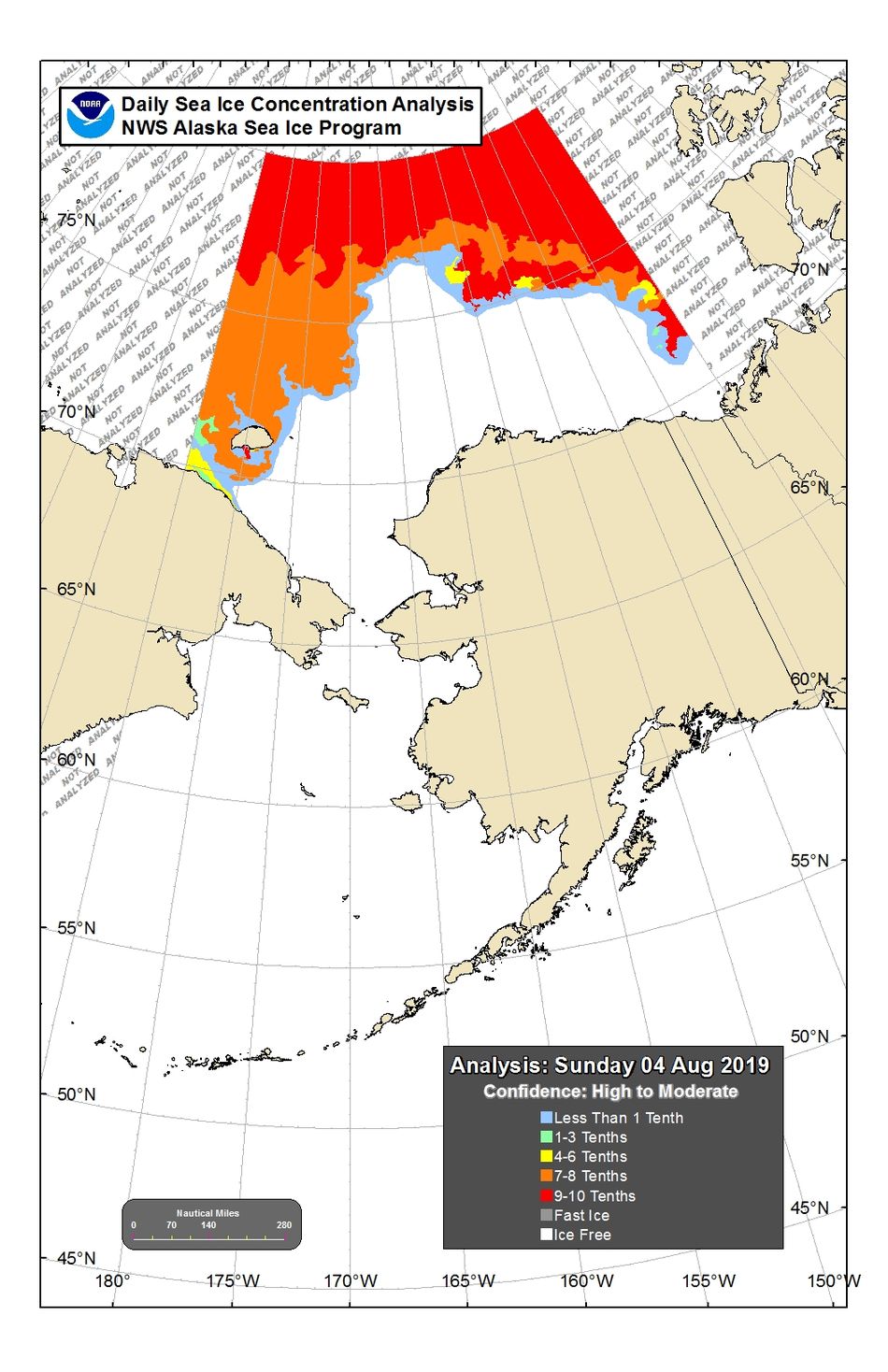 Even during the winter, historically ice-clad seas were nearly free of ice. The Bering Sea, in early March, was open ocean. That's not normal for winter. "It's normally pretty much covered completely with ice," said Meier.

"I’m losing the ability to communicate the magnitude [of change]"

A fundamental problem is that most of the sea ice around Alaska, and in the greater Arctic, is young. Over the past few decades, the older, thicker, multiyear sea ice has been melted away by warmer ocean and air temperatures. (And this July, the seas around much of Alaska, the Beaufort and Chukchi seas, were some 9 or 10 degrees Fahrenheit above average, noted Meier.) Only the thin, more vulnerable sea ice remains.

"The loss of the multiyear ice is really a big driver here," emphasized Thoman. "First-year ice is much more susceptible to the vagaries of weather."

The weather, swayed by climate, is often warmer than it was last century. The resulting, relentless ice loss is one of the most conspicuous results of a rapidly heating climate. Just like glaciers.

SEE ALSO: Where to see the dying glaciers

"This is due to the long-term warming of the Arctic," Zack Labe, a climate scientist and PhD candidate at the University of California, Irvine, explained in June. "Air temperatures are now rising at more than twice the rate of the global mean temperature — a phenomenon known as 'Arctic Amplification'."

Last month set the lowest July #Arctic sea ice volume on record in this data set (PIOMAS). The volume was about 47% less than the 1979-2018 average! 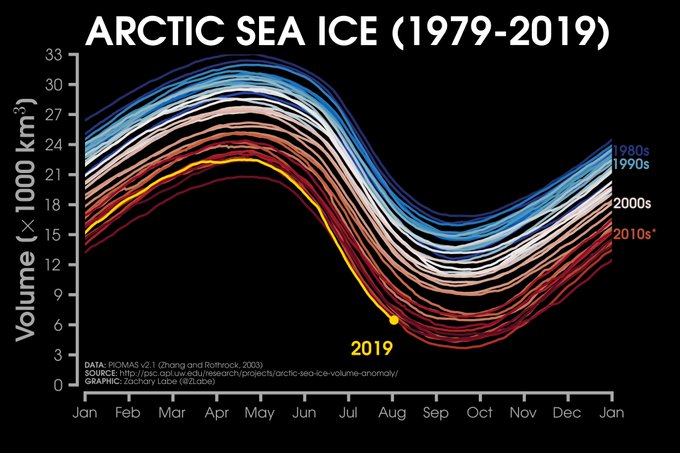 The Arctic's warming is especially amplified by the ocean. When reflective, white sea ice vanishes, the darker ocean absorbs solar energy, rather than reflecting it back into space. To boot, this warmth then mixes around with other waters, warming them too, explained Thoman.

It's a vicious cycle. And the consequences are ramping up.

One does not want to think of the Arctic life - such as polar bears - falling into the ocean and drowning. And because they never had adjectives to describe the horror, their voices went unheard. Now climate scientists are running out of words - in advance of our completely running out of sea ice. Hurricanes make headline news because there are communities there, and the footage is more eye-popping. The increased rates are happening a little too slowly for it to make the headlines every day on Google News or the New York Times - which means only people who care are following this rapid - not slow - decline. I wouldn't follow it without Rosey's help. but then, at least I chose to join Temple Illuminatus. Are we watching helplessly? Seems so.

Permalink Reply by MARGARIDA MARIA MADRUGA on September 11, 2019 at 1:24pm

The consequences are unpredictable.
The problem has been going on for years without anyone trying to change the situation.
No votes, as they say in Brazil.