Magma found simmering under Romania’s not so ‘extinct’ volcano

Magma found simmering under Romania’s not so ‘extinct’ volcano

July 18, 2019– Mary Greeley News – LUSH ROLLING HILLS cradle the still waters of Romania’s Saint Anne Lake, which rests in an ancient crater from the eruption of the Ciomadul volcano. The peak last blew its top some 30,000 years ago, and its lengthy quiescence has led many to presume the volcano would not likely erupt again.

Many building their towns, business and homes on the path of old lava flows

But as it turns out, the rocks miles below this serene scene may be stewing with a surprising amount of heat. A study recently published in Earth and Planetary Science Letters suggests that the system likely harbors between five and 14 cubic miles of magma, a maximum volume more than that of 20,000 Great Pyramids of Giza.

Scientist should know if a volcano is releasing Co2 then it makes sense it is still an active volcano.

To be clear, this does not mean an eruption is necessarily in the volcano’s future. But the work calls attention to the potential hazards of often overlooked volcanoes that have quietly simmered for tens of thousands of years.

“We look preferentially at active volcanoes—obviously because they show evidence of real risk,” says study author Mickael Laumonier of Université Clermont Auvergne, France. “But we shouldn’t forget other relatively recent young volcanoes, because they could present a risk that we should assess.”

By pairing geophysical and geochemical analysis with numerical simulations, the study gives researchers a stunning peek into what may be brewing beneath Ciomandul—and it promises to help scientists better understand how similar volcanic systems evolve over time.

At any given time, at least 20 volcanoes are erupting around the world. But there are many more that can potentially be active—the problem is figuring out which ones.

Volcanoes like Ciomadul that haven’t erupted in the last 10,000 years or so are often called inactive. However, this dividing line is somewhat arbitrary, Krippner says.

When it comes to volcanoes, “‘extinct’ is a very iffy word,” she says. Some volcanoes, like the infamous Yellowstone supervolcano, may lie dormant for hundreds of thousands of years between eruptions.

Ciomadul is the youngest volcano in the Carpathian‐Pannonian Region, Eastern‐Central Europe, which last erupted 30 ka.

This volcano is considered to be inactive, however, combined evidence from petrologic and magnetotelluric data, as well as seismic tomography studies, suggests the existence of a subvolcanic crystal mush with variable melt content. The volcanic area is characterized by high CO2 gas output rate, with a minimum of 8.7 × 103 t/year.

One sign that a seemingly quiet volcano has the potential for future eruptions is if volumes of molten rock linger below it, and past studies at Ciomadul had hinted that might be the case.

By studying the way seismic waves ricochet through the ground, past researchers spotted some indications of a magma reservoir. Surveys of the subsurface electrical conductivity—a property that is influenced by conditions like the temperature and water content of the rocks—also hinted that the zone between three and 17 miles down may be more mush than solid.

Yet it was still unclear if the rock was truly molten, and if so, how much magma there might be.

To answer these questions, Laumonier and his colleagues first turned to rocks from the volcano’s past eruptions. As magma sits beneath a volcano, it slowly cools and forms crystals, some of which act as tiny mineralogical record-keepers, charting the conditions in which they formed.

For example, a class of minerals known as amphiboles change chemistry depending on the temperature and pressure during crystallization. Searching for these crystals in the erupted rock helps researchers learn about the conditions of this ancient magmatic system.

The team combined this geochemical data with what they knew of the system’s dimensions and ran numerical simulations to determine how quickly it might have cooled through time, and to see what the volcanic plumbing could look like today. The result: The rocks in the upper crust beneath the volcano are, on average, 15 percent molten, with some regions as high as 45 percent.

This second approach gave a similar result, suggesting that the zone beneath the volcano is indeed between 20 and 58 percent molten. While this is a large range for the amount of magma that could be lingering in Ciomadul’s subsurface pipes, all the possible subsurface conditions yield a significant amount of melt for Ciomadul.

“We have no other options to explain the geophysical anomaly,” Laumonier says.

Researchers believe that an eruption is possible if a volcano harbors more than roughly 45 percent molten rock. Below that, the “system is all locked up by crystals, and it can’t erupt,” says Michael Ackerson, curator of rocks and ores at the Smithsonian National Museum of Natural History in Washington, D.C.

Thus, this latest analysis suggests that an eruption may be possible at Ciomadul—but that does not mean it’s inevitable.

Importantly, this study also probes the question of what such systems deep inside Earth actually look like.

“The traditional trope of a magma chamber is this big, gigantic menacing-looking, red-hot blob of magma sitting in the crust that’s about to erupt and kill us all,” Ackerson says.

But research increasingly suggests that’s likely not the case. Instead, magma reservoirs spend most of their lives quietly stewing in the crust. They’re often at least in part crystallized, forming a mushy, stony soup with varying proportions of crystals to melt throughout the system. This ratio might drastically differ in the magmatic plumbing of one volcano to the next.

The researchers observed that enough CO2 was transferred from the magma into gas over the days before eruption to indicate that CO2 monitoring could be a useful way of spotting the precursors to eruptions in Iceland. Based on the same set of crystals from Borgarhraun, the researchers found that magma can rise from a chamber 20 kilometers deep to the surface in as little as four days.

Anatomy of an apparently inactive volcano: #Ciomadul in eastern-central Europe. After our paper in the EPSL (Laumonier et al), here you go another one about the isotopic content of the emitted CO2 gases (https://agupubs.onlinelibrary.wiley.com/doi/abs/10.1029/2018GC008153 …). Eruption chronology and repose time: JVGR Vol. 373 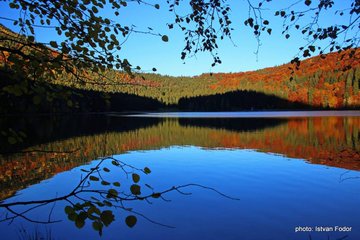 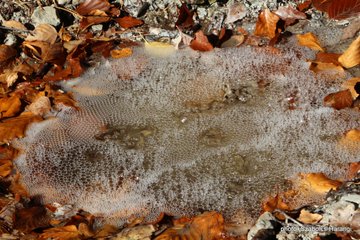 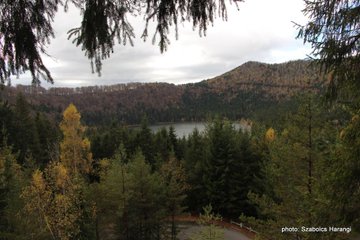 Crystals can form in the rising molten rock in as little as 18 minutes. If the magma becomes more than 20 percent crystals, they can act like guard rails that funnel gas to possible cracks within the volcano or to the opening at the Earth’s surface.

For Ciomadul, the researchers believe the molten rock collects in two zones of mush: an upper region between three and 11 miles deep and a lower, hotter reservoir starting around 18.5 miles down. Each of these zones is likely composed of overlapping pockets of molten material of slightly different temperature and composition. For now, it’s unclear how the two zones precisely connect, but the new magmatic mapping still provides valuable information about this volcano’s inner workings.

“This is a new data point in the story of global magmas,” Ackerson says. “This is one specific volcano in one specific point in time, and that’s going to help us get a much broader, nuanced picture of how magmas form and evolve.”

University of Alaska Fairbanks researchers have discovered that volcanoes have a unique way of dealing with pressure — through crystals.

According to a new study published in the Journal of Geology, a network of microscopic crystals can lessen the internal pressure of rising magma and reduce the explosiveness of eruptions.

Crystals can form in the rising molten rock in as little as 18 minutes. If the magma becomes more than 20 percent crystals, they can act like guard rails that funnel gas to possible cracks within the volcano or to the opening at the Earth’s surface.

“The problem is when the gas can’t get out,” said Amanda Lindoo, lead author and UAF geosciences doctoral student. “That causes a buildup in pressure that can lead to the very explosive eruptions that shoot ash plumes. The crystals can alleviate that.”

Oh, I have heard about this, Rosie, but you here explained it to the minutest detail.

All these volcanic activity has been predicted Astrologically, because Saturn and Pluto are conjunct in Capricorn and Uranus is in Taurus, both Earth signs therefore causing the Earth to shake and bake, there will be lots of Earthquakes as well as volcanic activity.

I did not realize that Carmen! Thank you! I have been following Yellowstone Supervolcano for years! That is changing!!!