My introduction to bodysurfing 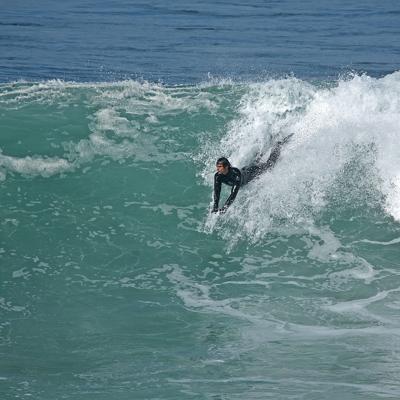 My first memory of the ocean is that of being rescued as a child. It was a summer day, the shorebreak was crowded with bathers in front of the lifeguard stand, and I was in the middle of the mob. Suddenly I could not touch bottom and was being swept out to sea.

Swimming furiously toward shore was no help; I was making no progress. Out of the blue I was grabbed around the waist and was being brought in. My Sunday school teacher had recognized that I was in danger and rescued me. I have no memory of what happened next except that I was safe.

I have not had to be rescued since — although I have made many rescues.

How does one learn about the ocean? By trial and error. As children growing up in a shore town, we were at the beach all day, all summer long. Leaving home in the morning, I would meet friends at the beach and we would alternate between being in the water and coming out to roll around in the hot sand until we resembled breaded veal cutlets.

We had no surfboards, for there were none around at the time. We just went out and played in the water in front of the lifeguard stand.

It was during this time that we learned about the mechanics of waves and how to stay out of trouble. We bobbed in the water taking and giving; it was just play, but we learned about the surf, building up experience with the breakers that would provide us with important knowledge: which waves became large, which did not, which waves were good to ride and which ended in disaster. These experiences became the sum total of our surfing knowledge. Catching a wave was the goal. Gradually we learned to ride the broken white water in with our hands in front of us. We would ride through the shorebreak to ankle-deep water, go back out and repeat the process ad infinitum, weaving through the other bathers to avoid contact. As we reached adolescence we might try to collide with a pretty girl in knee- or waist-deep water.

We moved on to catching the unbroken wave just before it breaks and falls. The wave about to break resembles a C in cross section. Launching at the C moment allows one to catch the wave and move forward with it. Advanced technique involved keeping your arms at your side, launching with your head and seeing where you are going. If you weren't careful you could go over the falls, drilling your head into the sand.

In teaching my daughters how to bodysurf, I would emphasize launching at the C point. They and most of their friends picked up the concept rapidly. There were always some who were afraid, could not swim, or did not understand the theory. They would not become surfers.

We gradually learned that we could “cut” the wave. Instead of going straight in, we could angle the takeoff and slide down the unbroken face, giving us a longer and more enjoyable ride.

If surfing in the most general sense is riding a wave, then bodysurfing is technically surfing; it is riding the wave without a surfboard. Bodysurfing is preferable under certain circumstances.

Sometimes the waves are just too big to get a surfboard outside since there are no paddling channels. But one can always get out bodysurfing by diving deep under the white water and avoiding the turbulence. The reward is huge faces on which to launch and get a thrilling ride.

As a lifeguard on the beach patrol, anyone caught riding a surfboard during working hours faced a fine and possible suspension. Every now and then in foggy conditions one could get out and not risk getting caught. The fine was $20, and it was up to us whether the waves were worth the money.

Bodysurfing during work hours was the answer. You could go out, mingle with the crowd and keep a close eye on bathers while riding a few waves. It was great fun to watch the bathers try and imitate our actions. On bigger days with hollow-backs (top-to-bottom hollow-breaking waves), it was great fun watching the neophytes get hammered by the surf. They would turn their back to a breaking wave only to have it explode on them and toss their body like a ragdoll.

The real pro body surfers use aids to ride the waves. A plane, a flat surface attached to one hand, helps to stabilize the cruise across the face. Flippers are necessary to provide the quick acceleration needed to launch into a breaking wave. The takeoff is late and critical. One small mistake and over the falls you go, tumbling with the peak of the breaking wave into the shallow water in front of the swell.

There are surfers who dedicate their life to bodysurfing, and there are spots just for them. The dirty old Wedge in Newport, California, is one of the big locations. It is an impossible shorebreak wave that is huge, unpredictable, and breaks into 2 feet of water.

The peak is formed by the convergence of swell and reflection of swell from the rock jetty nearby. The two swells combine to form an erratic peak and an unbelievably steep takeoff. Sometimes backwash from the beach is part of the equation. When big, there is always a crowd out in the water vying for a chance at the crest. Each wave at the Wedge is an adventure and a potential disaster. Body-surfing is an art unto itself. It gives many surfers their start, and it can still be enjoyed at an advanced age.

Fred Weber is a goofyfoot who lives in Ocean City. For suggestions or to comment email wavelengths.fw@gmail.com.

Very interesting. I live in a surfing town, that is what Encinitas is all about, but they d use surfboards.

The Pacific Ocean , which is the least pacific of all the oceans, has big surf waves, but they become bigger right in our shores , I myself, can not even swim properly, so, I watch them, without ever even trying to do so.

But is interesting to learn all about it...

I can't swim either.  But I remember my cousins in Florida one year body surfing.  They did it so much their stomachs were raw from the sand.  Swim or not, I tried in the shallow waters.  I never did get the hang of it.

So, here we are, very interested on the subject, but not practical approach to it....