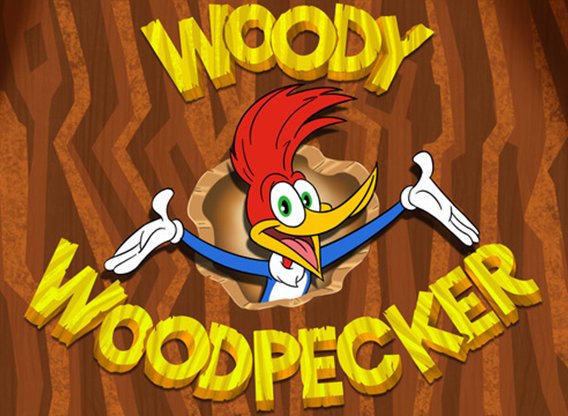 Woody Woodpecker is a cartoon anthropomorphic woodpecker that has appeared in theatrical short films produced by the Walter Lantz Studio and distributed by Universal Studios.

He was created in 1940 by Lantz and storyboard artist Ben "Bugs" Hardaway, who had previously laid the groundwork for two other screwball characters, Bugs Bunny and Daffy Duck, at the Warner Bros. cartoon studio in the late 1930s. Woody's character and design evolved over the years, from an insane bird with an unusually garish design to a more refined looking and acting character in the vein of the later Chuck Jones version of Bugs Bunny. Woody was originally voiced by prolific voice actor Mel Blanc, who was succeeded in the shorts by Danny Webb, Kent Rogers, Ben Hardaway, and, finally, Grace Stafford (wife of Walter Lantz).

Woody Woodpecker cartoons were first broadcast on television in 1957 under the title The Woody Woodpecker Show, which featured Lantz cartoons bookended by new footage of Woody and live-action footage of Lantz. Lantz produced theatrical cartoons longer than most of his contemporaries, and Woody Woodpecker remained a staple of Universal's release schedule until 1972 when Lantz finally closed down his studio. 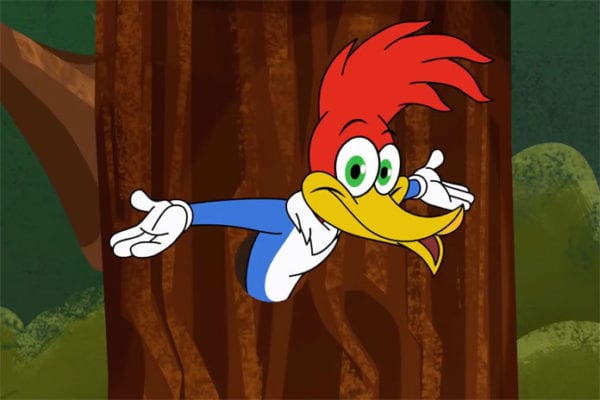 The inspiration for the character came during the producer's honeymoon with his wife, Grace, in June Lake, California in 1941. A noisy acorn woodpecker outside their cabin kept the couple awake at night, and when heavy rain started, they learned that the bird had bored holes in their cabin's roof. As both Walter and Gracie told Dallas attorney Rod Phelps during a visit, Walter wanted to shoot the bird, but Gracie suggested that her husband make a cartoon about the bird, and thus Woody was born. Woody shares many characteristics in common with the pileated woodpecker in terms of both physical appearance as well as his characteristic laugh, which resembles the call of the pileated woodpecker. These similarities are apparently the result of the artistic license of the creators and have caused much confusion within the birding community among those who have attempted to classify Woody's species.

In 1947, Woody got his own theme song when musicians George Tibbles and Ramey Idriss wrote "The Woody Woodpecker Song", making ample use of the character's famous laugh. Kay Kyser's 1948 recording of the song, with Harry Babbitt's laugh interrupting vocalist Gloria Wood, became one of the biggest hit singles of 1948. Other artists did covers, including Woody's original voice actor, Mel Blanc. Lantz first used "The Woody Woodpecker Song" in Wet Blanket Policy (1948), and it became the first and only song from an animated short subject to be nominated for the Academy Award for Best Original Song in 1948 but it lost out to “Buttons and Bows”. Lantz soon adopted the song as Woody's theme music, and due to the song's popularity, Woody Woodpecker fan clubs sprang up, theaters held "Woody" matinées, and boys got the "Woody Woodpecker" haircut.

"The Woody Woodpecker Song" and the Woody Woodpecker cartoons made extensive use of Woody's famous laugh, upsetting the man who created it, Mel Blanc. (He first used the laugh, in a different recording, for the seminal pre-Bugs Bunny character in 1938's Porky's Hare Hunt.) Although Blanc had only recorded three shorts as the voice of Woody, his laugh had been recorded as a stock sound effect and used in every subsequent Woody Woodpecker short up until this point. Blanc sued Lantz and lost, but Lantz settled out of court when Blanc filed an appeal. Although Lantz stopped using Blanc's Woody Woodpecker laugh as a stock effect in the early 1950s, Blanc's voice was still heard saying "Guess who?" at the beginning of every cartoon for the duration of the Woody Woodpecker series. 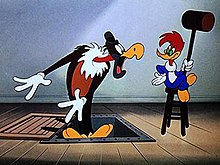 The Woody Woodpecker Show was named the 88th best-animated series by IGN.

I always enjoyed watching Woody the WoodPecker and Looney Tunes? Can anyone purchase all of Looney Tunes on video/CD?