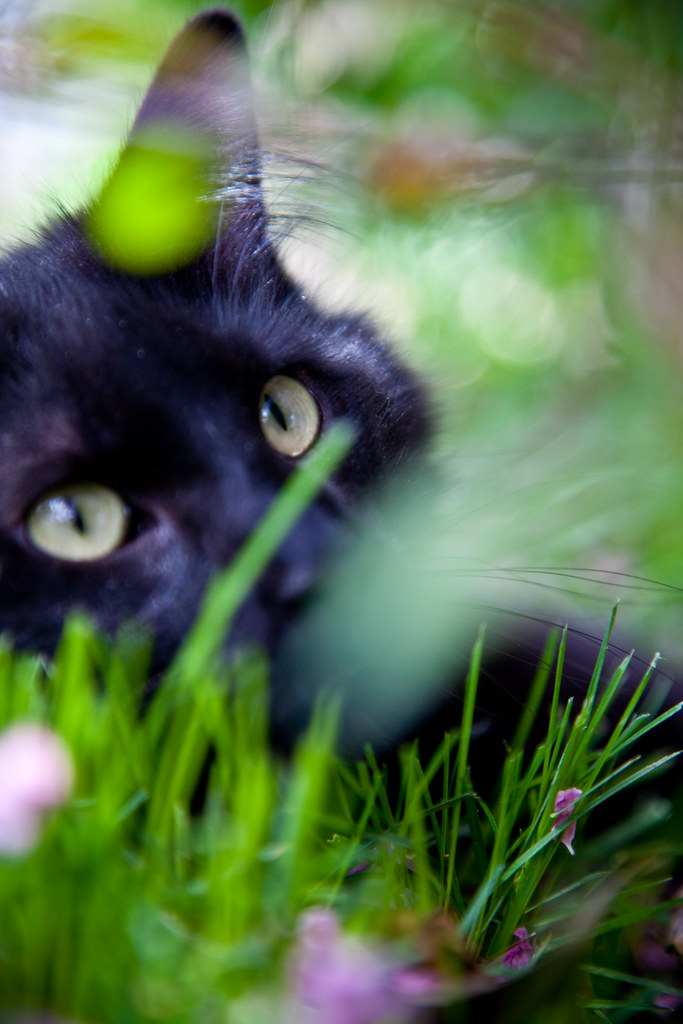 Black Cat Symbolism and Meaning can be a bit hard to read. Throughout history, these beautiful creatures have been persecuted simply because of their black color. WhatIsMySpiritAnimal.com seeks to help educate folks about Black Cats. The bottom line is Black Cats are just as wonderful as every other feline. They are sentient beings with personality and a huge capacity for love. It’s utter nonsense to believe that Black Cats are bad omens. All animal spirit guides can appear to warn us of danger, but that does not make the animal themselves ‘bad omens’. It’s the whole ‘don’t shoot the messenger’ thing, ya’ know?

The mysterious, magical Black Cat has conflicting symbolism depending on the era and culture you read about, but let’s start with a little science. Black Cats are not a specific breed, but simply a cat with genetically produced black fur pigmentation. This seems to happen more in males than females. This is the same combination of genes that gives most black cats their stunning golden eyes that seem to pierce the night.

The folklore of Black Cats seems to paint them as evil or wonderful. Scotland and Ireland generally held black cats in high regard. Their arrival at the home portended prosperity. For a single woman, owning a black cat was said to attract numerous suitors. Germans say that a Black Cat walking toward you or crossing left to right grants wishes. The rest of Europe was not so kind to our sable feline friend. Here and in Western superstitions, the Black Cat was a Witch’s familiar and represented bad luck, including potential death.

During the Witch Hunts Black Cats sometimes suffered the same dire fate as their Witch companions. The Cat was either a demon or even another Witch who had shapeshifted to avoid capture. Felines could go where humans could not. Pope Gregory IX said that Cats were a link to the devil. This proclamation lead to the burning execution of over 900 Cats in France.

On a far happier note, sailors and fishermen both treasured black Cats as lucky pets. In the home, the Cat’s energy was said to protect the fisher at sea. On the ship, cats caught disease-bearing rats who could also destroy cargo. Two notable examples are Chibley who rode the tall ship, Picton Castle putting in over 180,000 miles at sea, circumnavigating the globe five times. Also, Tiddles who was born on the HMS Argus and then took up official station on the HMS Victorious travelling some 30,000 miles.

The most notable veneration of Black Cats comes from Egypt. There a Cat Goddess named Bast oversaw all matters of protection. Egyptian homes hosted Black Cats to win Her favor. In the wise words of author Terry Pratchett, “In ancient times cats were worshipped as gods; they have not forgotten this.” The idea of housing a Black Cat for luck wasn’t unique to Egyptians. History Tells us of King Charles I who adored his Black Cat. Upon its death he declared his good fortune gone. In an odd bit of synchronicity, he was charged with treason the next day.

Modernly, the sad truth is that 70% of abandoned Cats are Black, they are less likely to find a forever home than Cats of other colors, and as many as 30% of the black feline population face euthanization. This lead to various types of advocacy, trying to protect these beautiful creatures. In both the United States and the United Kingdom there are special holidays set aside for Black Cats. October 27 is Black Cat Day in Great Britain and Ireland, and August 17th is Black Cat Appreciation Day in the US. In both countries, people are encouraged to adopt Black Cats with organizations like the ASPCA offering discounts or even free adoptions. If you are a cat lover, you don’t have to wait until those days to visit your local shelter or animal rescue group to find that new purrfect kitty for pampering. Everywhere you go you see Black Cats. They’re in TV ads, the paper, your cell phone apps, your dreams and even wandering near you on the sidewalk. It appears that the Black Cat Spirit Animal has a message for you.

For Witches and Pagans, the appearance of the Black Cat Spirit suggests you focus more on your personal power and how you use it. Black Cats know magic, and this Spirit Animal is more than happy to assist your studies in that realm.

Another reason for Black Cat’s appearance may have to do with your sense of self. Do you feel shunned like the Black Cat, or left in the dark all the time? Black Cat Spirit understands these emotions and comes to aid your healing process. You are worthy of love and dignity. Do not let any social stigmas take that away from you.

The golden eyes of Black Cat Spirit Animal also symbolize the way in which you see things. Are you figuratively behind some black veil that keeps you from recognizing the truth in yourself and others? Black Cat shows you new ways of looking at the world and may even encourage Clairvoyant or other psychic aptitudes that boost intuition. The green eyes of a Black Cat might suggest it’s time to ‘grow’ your own personal form of magic.

There are other messages that Black Cat shares in common with all Cat Spirits. Remain flexible is perhaps the one that mews most strongly in your ears. By working cooperatively with Black Cat energy, you will eventually get back on your feet no matter what.

Those born with a Black Cat Totem Animal are wholly alchemical and enigmatic. Somehow they always seem to have their life together even when it looks chaotic. Some Wise People believe that this totem speaks of a person with unfinished business from a previous life. If so, this influences the Black Cat person in everything they do.

If this is your birth Totem, you tend to be a risk taker but need caution. Always consider consequences before you leap into that tree or sneak out the door. Sure, your senses are keen, particularly sight, but sometimes your playful, curious nature gets the best of you. That’s when you find yourself in a pickle.

Friends and family already know they can’t fool you. You always know when something’s afoot – it makes your proverbial whiskers tingle. They also know you have a passion for napping, snacking and repeating. Black Cat people should seek healthy snacks so they don’t get pudgy.

You would do well to remember that the color Black represents authority, elegance and adaptability. All of these attributes are part of the Black Cat Totem. You can be a wonderful leader who rarely loses dignity under pressure. You also have the ability to roll with life’s twists and turns. Sometimes you even find them as fun as a knotty ball of yarn that you untangle meticulously.

The caution with the Black Cat Totem is that you can succumb to the idea that somehow you are bad luck to those around you, or somehow lesser to them. When that happens reach out – get petted and pampered by those you love. You deserve it.

Invoking Black Cat as your Power Animal is only for those who are truly ready to break free from the bonds of prejudice and persecution. This takes courage. See, Cats (black, white, red tabby, Calico, Siamese, Sphynx, et al) don’t care what anyone thinks. Oh, they may love their human(s) and their furever home but at the end of the day Cats are some of the emotionally strongest animals on Mother Gaia. If others are spreading untrue rumors about you, trying to make you feel unworthy, or oppressing you in any way call on Black Cat medicine. This powerful energy can help you move through dark times with the skill of a cat on the prowl.

Turn to Black Cat as a Power Animal when:

Native Americans feel that a Black Cat comes to you in a vision, it bears a timely teaching. With Black Cat, that lesson focuses on independence, intuition and tapping into the supernatural. They may also bring insights into your sensual self.

There is a story from the Maliseet and Passamaquoddy Tribes about Black Cat and The Sable. It begins with this unlikely couple journeying to a place where they can make maple sugar. Along the way, they got separated. Sable came upon the home of a Snake, who welcomed him (not out of hospitality but out of hunger). When Sable realized his predicament he sang out to Black Cat as loud as he could. Black Cat heard his cries and comforted him, telling him he ha a plan. Sable was to get a stick as the Snake instructed but make sure it was crooked. When Snake complained, Sable should heat the stick in the fire to straighten it, then knock Snake in the head firmly. Once done, Sable wandered back into the woods with the Snake trying to follow him. There, Black Cat killed the snake offering it to all the animals and birds as food. After this Black Cat returned home a hero.

Alas, a hero’s fame isn’t always a good thing. Black Cat caught the eye of the Chief’s Wife. She determined to be with Black Cat so she invited him to a gull egg hunt. They went across the water to an island, filling their basket and then starting their journey home. At just that moment a beautiful bird, who was the Chief transformed, flew over the canoe. Black Cat shot his arrows and the bird fell, yet when he looked in the water he could not find it. By this time the Chief’s Wife was far out in the water and Black Cat was left alone on his island.

Black Cat as a Celtic Animal Symbol & Around the World

Celtic Mythology in Scottish and Irish tradition speaks of the at Sith or Sidhe who was a large Black Cat but with one white dot his belly, Cat Sith was considered a fairy (or a witch) depending on the story, who could transform 9 times as he wished. When it appears it always have an arched back with hair up. Folk Tales say that this creature can clam souls before they move to their final resting place unless distracted by mourners with riddles or music. But Cat Sith is not wholly sneaky or mean. On Samhain, he blesses homes that leave him a bit of cream for the night.

A plethora of Black Cat myths, superstitions and lore appear around the world. It’s interesting measuring the dichotomy for this obsidian beauty. Let’s take a look:

Ireland: A Black Cat crossing your path in the light of the moon portends serious, potentially cat-a-strophic illness.

Arabia: Jinni take the form of Black Cats, who have seven lives.

Persia: Pestering a Black Pussycat brings harm because it is part of your spirit-self given as a companion and helpmate in Earthly realms.

England: A Black Cat walking in front of you takes your troubles with them. If a Black Cat visits your inn welcome him nicely and he will bring in more patrons. Giving a couple a pudgy Black Kitty as a charm for an excellent marriage.

Sailing Lore: Black Kittens on a ship calm both wind and sea. However, throwing a cat overboard incurs a wrathful storm.

Numerous interpretations exist for Black Cats appearing in your dream. Here are a few:

A symbol of the Feminine side of self (are you connected with it?).