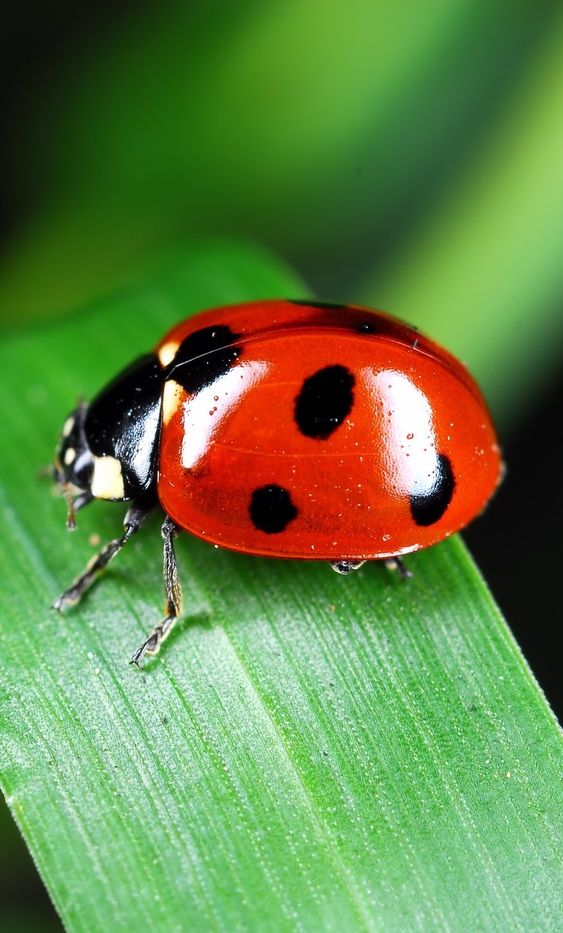 If a ladybug keeps landing on you or one comes to you as an animal totem then take heed.

Presence of a ladybug is evident in myths and legends.  Ancient folklore said that beetles can bring you luck.   You need to let it roam freely and allow it to fly on its own if you’re planning to keep the good luck.  A ladybug presence is a sign of sunshine. It is rare to see ladybugs that possess fewer than seven spots; they say that ladybug that has 6 or less indicates an abundant harvest. If you see a ladybug running into your hand, it means your wedding day is soon to come. An old nursery rhyme is said to be the source of this belief. Ladybugs are small insects, varying from 1-10 mm, these insects are commonly orange, yellow or red with small black spots on their wings. Some species have a larger spot that they merge, creating an illusion that the light colors are the spot. Some ladybug species are entirely, black, grey, or brown and may be hard to recognize. They are known to be useful; they feed on pests that destroy agricultural supplies. Yes, it is surprising to know that ladybug is a carnivore.  But there are some that feed on vegetations, but we are not focusing on their negative aspects.  We will look at how beautiful this fragile creature is and how the ladybug can help you.

A very familiar legend states that its number of spots indicates its age but the truth is their different spots determine the species of the beetle.  The same principle can also be applied with their color; darker color seems to be present on a mature beetle. Generally, humans hate any kinds of beetles, but the case is different with the ladybug. Unlike other beetles, we enjoy the pleasure of having this insect fly around us. Their lovely colors are a joy to the sight. This animal symbolizes trust and a carefree life. Beetle will creep to your shirt freely knowing they can be killed in a matter of an instant.

What does the Ladybug mean as a totem animal? As you probably know so far, ladybugs symbolize good luck and fortune. However, they’re also a symbol of happiness, awareness, prosperity, and joy. It’s supposed that if one of these bugs lands on you, you will be followed by good luck and your future is very bright. So, if you’ve had some wishes recently, this fellow can make them come true for you. Although small, the ladybug plays an important role in many cultures around the world. For example, Asian people believe that if you catch a ladybug and set it free again, it will fly to your true love and whisper your name into the person’s ear. Sounds crazy, right? Many old lady tales include ladybugs as a symbol of love. Another interesting assumption is that the number of spots on their back represents the number of months that need to pass until you find your soul mate. Besides being a symbol of love, this bug is also a recognized symbol of protection. Farmers respect these bugs, as we mentioned previously because they act as a natural pesticide for insects.

Your house is on fire and your children are gone.

And she (hid) crept under the pudding (baking) pan.'

An old Chinese story links this creature with love. The story states that if a ladybird will come and visit you, it means that true love will also come.  There are other variation of this story which tells about the number of the ladybug’s spot also indicates the months until your true love arrives. When this insect is calling you, it is sending us a message associated with love.  Not just any kind of love but deep love, passion, and sometimes even sex.

Does it mean that ladybird is a symbolism of a true love to come? That maybe the case (for some) but I want to think that ladybug is reminding us to keep an open heart, appreciate everything in life.  Notice even the smallest thing that comes your way.  Sometimes we forget to appreciate those small things, the sunshine in the morning, the air we breathe, a warm smile from a friend, or even the simple chirp of a bird.

Ladybug shows up as a spirit animal totem when...

Call on ladybug as a spirit animal totem when...