Hekate’s Animals: Ancient Creatures, Modern Menagerie, and Ways to Include Them in Witchery

AUGUST 7, 2018 BY CYNDI BRANNEN
Hekate’s animal horde is vast and diverse, from her beloved hounds to the witch’s cat. Here’s a list of many of her historical animal companions with several thoroughly modern ones, along with lots of ways of including the Queen of Witches’ animals in our magic. How Hekate is Associated with Animals

I used two broad groups to categorize Hekate’s animals: those commonly associated with her in myth, stories, literature and art and modern practitioners favored creatures. I looked for themes and also the source to determine their position on the list.

Hekate is unique among most goddesses in that she has an extensive and diverse available historical, literary and artistic records. Some of these sources have greatly influenced modern practitioners’ chosen animals, while others are less commonly associated with her today.

Regarding the ancient written sources, Hekate’s zoological connections are found through epithets, descriptions and in images/statuary.  Through ancient epithets Hekate is associated with animals when Hekate is called either an animal, said to have animal characteristics or is otherwise associated with an animal. She is called “She-Toad” (Phroune), Lyco (She Wolf) and many other animals, particularly in The Greek Magical Papyri. Leaina (Lioness) comes to us from her cult in Caria (modern western Turkey) where she was seen quite differently compared to her mainstream Grecian image that often associated her with a horde of fierce hounds wandering the night.

In some documents, she is described as having a role in relation to animals, like leading her hounds, holding snakes or blessing horses. Indeed, Hesiod’s version of Hekate (her origin story) in his Theogeny illustrates that she “sits by kings and “stands by” horsemen.

“From the political assembly to the farmer’s stable, Hecate is seen as a vital factor in the success of human endeavor.” – from A Portrait of Hekate (1981) by Patricia Marquardt.

In ancient life, this required governance over a host of animals,  domestic and wild.
Porphyry in “On abstinence from animal food” describes a four-headed Hekate (horse, bull, lioness and dog). This theme of Hekate having three or four animal heads is a rather common one throughout the ages.

“Hekate’s appearance is powerful and terrifying: she is viewed as fully armed and girded with serpents, and of triple-form and three headed and radiating fiery light. At a lower level she appears with four animal heads: horse, bull, hydra and dog” – from The Goddess Hekate by Stephan Ronan.

The Hekate he is describing comes from The Chaldean Oracles where she is the creatrix of the material world. Using this interpretation, Hekate can be associated with every animal. 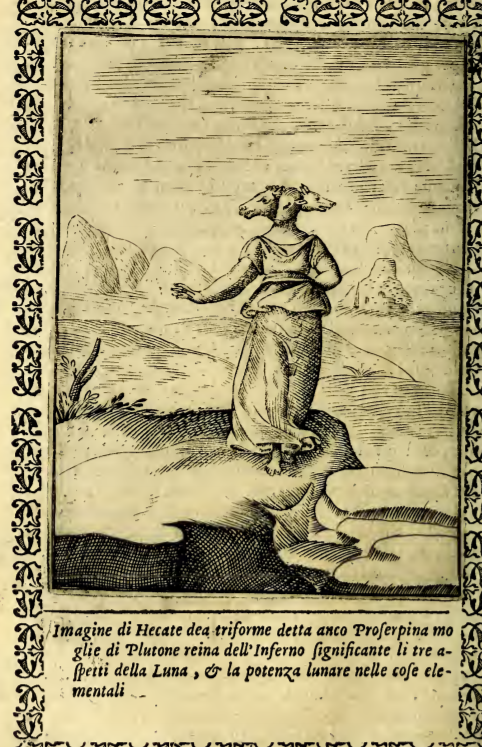 From: Le imagini dei degli antichi
by Cartari, Vincenzo, b. ca. 1500; Malfatti, Cesare, b. ca. 1550. You can explore this amazing text here: https://archive.org/details/leimaginideidegl01cart

As a Chthonic goddess, she was considered an “earth” deity, but not in the same sense as Gaia (for example). Her role as an earth goddess is associated with the types of animals she was associated with, especially dogs and horses, but also goats, donkeys, bulls, cows and other domestic animals. Lions and other big cats were also connected to Hekate. Her association with wild animals, like bee, deer and bear, is often through her connection/conflation with other goddesses, particularly Artemis but also Bendis. Keep in mind that these goddesses were viewed in diverse ways as well. Vulture is in The Greek Magical Papyri, but not directly with her in a spell or hymn. And if we include mythical beasts, she is connected with dragons and hydra in multiple sources.

Hares and rabbits are not directly associated with Hekate in the ancient texts. There is a sideways connection through the Island of Delos which was also known as Lagia (Hare). This island is the birthplace of Artemis and is also associated with Hekate. Interestingly, the island was also known as Cynthia (latin for Cynthos). Both Artemis and Hekate were sometimes referred to as such. I am only referred to as such in the most formal situations, like at airports.

Some animals, like the bat, cat, crow and owl, come to her since she is the Queen of Witches. Owl has an ancient association with her in written sources and coins. Bats, cats, and crows have been strongly linked to witchcraft since ancient times. I’ve selected Blake’s painting from the many examples of the way Hecate, women and witches were commonly portrayed in art and literature as evil. The animals shown with such women and goddesses were thus also suspicious. I am a bit obsessed with this painting for a few reasons, most particularly because this is not actually Hecate. I hope your take-away message from this article is this so I am sharing it. Although it’s not Hekate, it does feature many animals linked to her as Queen of the Witches. 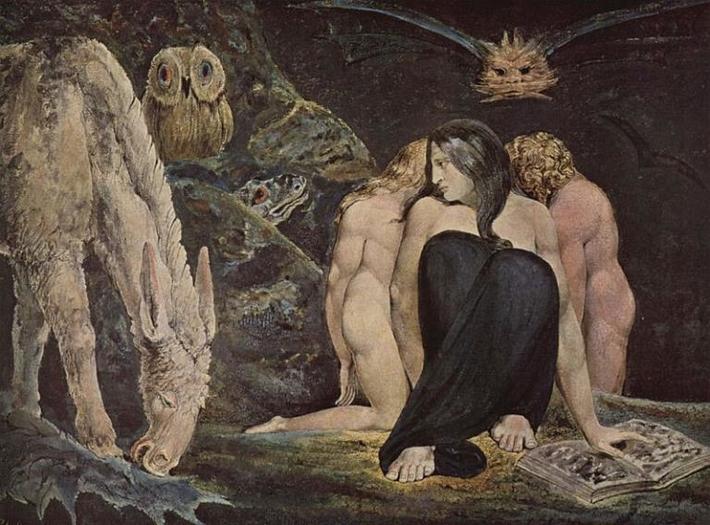 Enitharmon’s Joy, formerly known as Triple Hecate by William Blake. Experts believe this not to be Hecate at all, but this painting is commonly used to represent her. Read more: https://www.nationalgalleries.org/art-and-artists/18505/night-enith...

Hekate’s portrayals in words and images today uses the animals associated with her directly and indirectly throughout history. More fascinating to me are practitioner’s reports of the non-traditional animals they associate with Hekate. I asked members of three different Hekatean groups about such creatures. The list was incredibly varied, ranging from beetles to dolphins. Insects were a common theme, with spiders being the most popular, but there were several reports of moths (luna), butterflies and fire fliesas well. Her ancient epithet of Klothaie, Spinner of Fate, is definitely arachnid.

Given that Hekate is a Goddess of the Sea, it’s not surprising that many practitioners associated aquatic creatures with her, including dolphins, seals, otters and various types of fish. I also asked the in-house panel of experts, my two sons since they have to listen to me go on about Hekate.My oldest suggested the shark which is his personal totem animal. I happen to agree: they are ancient, misunderstood, scary and incredibly intelligent. Sharks could definitely be one of Hekate’s animals.

If you have a non-traditional animal you associated with Hekate, please let me know so I can add it to the list.

Including Hekate’s Animals in Magic

The ancients used animals in various ways in magic. Animals were often slain as sacrifices to Hekate, especially dogs and black lambs. You can read more about Hekate’s Hounds here. Animals were also involved in ancient spells. One of my favorite examples comes from The Greek Magical Papyri that involves drowning a cat and subsequently releasing it’s daimon (spirit) to do the practitioner’s bidding, all while evoking Hekate. There are so many delightful examples of this from the ancients that I had to include one here:

“I myself saw Canidia, with her sable garment tucked up, walk with bare feet and disheveled hair, yelling together with the elder Sagana. Paleness had rendered both of them horrible to behold. They began to claw up the earth with their nails, and to tear a black ewe-lamb to pieces with their teeth. The blood was poured into a ditch, that thence they might charm out the shades of the dead, ghosts that were to give them answers. There was a woolen effigy too, another of wax: the woolen one larger, which was to inflict punishment on the little one The waxen stood in a suppliant posture, as ready to perish in a servile manner. One of the hags invokes Hecate, and the other fell Tisiphone. Then might you see serpents and infernal bitches wander about; and the moon with blushes hiding behind the lofty monuments, that she might not be a witness to these doings. But if I lie, even a little, may my head be contaminated with the white filth of ravens..”  – from Q. Horatius Flaccus (Horace), The Works of Horace, C. Smart, Theodore Alois Buckley, Ed.

While many of us modern practitioners view these techniques as barbaric, it’s still possible to include the “daimon” of animals in our own witchery. The bare feet and disheveled hair hasn’t changed, at least not for me. Without sacrificing animals, we can use their energies through bits and pieces of them, spirit connections, symbols and images. Use blood, bones, claws, feathers, fur, hair, nails, skin, tails and teeth to harness their spirits for your own magic. Blood should be as fresh as possible, while the rest can be dried or fresh. Roadkill is a Hekatean witch’s treasure. If you are new to collecting dead creatures, small birds are a good place to start. This is a good tutorial.

If you are new to animal spirit magic, you need to buy Ted Andrews’ Animal Speak: The Spiritual and Magical Powers of Creatures Great and Small.

Those are just a few ways to include Hekate’s Animals in your witchery. Whatever animals from her menagerie share their energy with you, I hope you find these relationships as deeply satisfying as I do.

The Covenant of Hekate has information on some of her traditional animals, available here.