Irish-American Witchcraft: The Right and Wrong of Fictional Fairies

This is a question that I was asked to look at on social media and I thought here was probably the best venue. Fairies are a hot topic in fantasy and urban fantasy and have been for decades, so what are novels getting right and where are they going wrong? It’s a good question and also an important one I think as I see more and more pagans adopting beliefs from fiction rather than folklore. 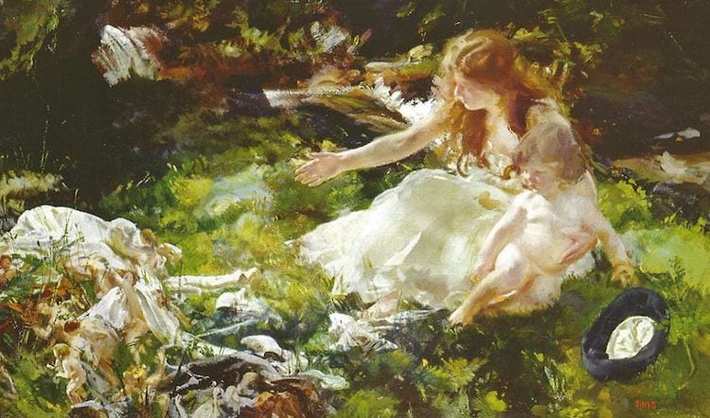 “And the Fairies Ran Away” by Charles Sims. From the Leeds Art Gallery via WikiMedia

In and of itself its fine to have beliefs from odd sources – entire religions are founded on fiction and there’s nothing wrong with deciding to go with a belief you gleaned from a novel – it only becomes a problem when its put forward as genuinely older folk belief and becomes mainstream. Because when that happens, when it becomes popular under the guise of genuine traditional folklore, it actively erases the older cultural folklore which in many places is already struggling.

When a dominant culture starts to rewrite minority folklore not from a place of belief but for entertainment, even if those rewritten ideas are then absorbed again as beliefs, it’s a big problem. Not only because it accelerates the decline of the original culture but also because it raises the question of how much depth these new beliefs actually have to them.

Where Fiction Gets it Right

Fiction does get fairy folklore right, although some books are definitely closer to the mark than others. What follows will of course be generalizations based on a variety of different books and series, so even though I’m saying fiction gets these details right there will always be examples of books that get these bits wrong as well. Such is the risk with a diverse market.

Iron – most books I’ve seen do correctly make iron a substance fairies avoid or are harmed by. Different authors handle this a variety of ways because folklore is vague on the how and why of iron’s apotropaic qualities. It is widespread and well known and something that is found in many books in a way that is either true to folklore or fairly close. 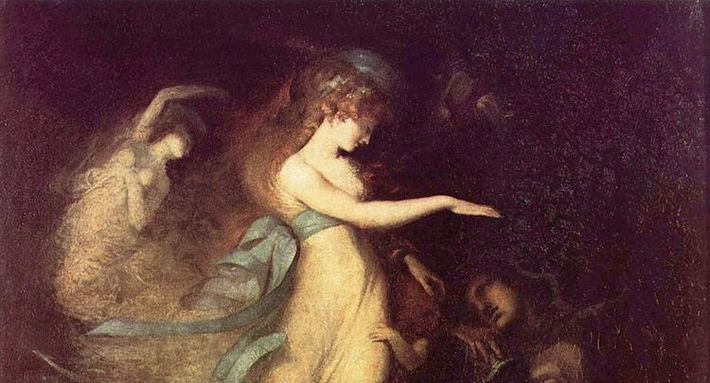 “Prince Arthur and the Fairy Queen” by Johann Heinrich Füssli. From WikiMedia

‘Good’ and ‘Bad’ – although it’s often played as a trope, and sometimes terribly mauled especially in young adult novels, many authors do follow the Scottish folklore of there being two groups of fairies, one of which is more positively inclined towards humans the other being more malevolent. While this isn’t a universal concept it is from Scottish folklore specifically and has gained wider popularity.

Human-sized Fairies – a bit more hit or miss but increasingly more common in books to see fairies being depicted in a range of human sizes rather than as tiny. In folklore its clear that fairies appeared in many different forms and could be tall or short. While we do see some very tiny fairies those are actually rare in folklore and very specific in location and backstory. Most fairies are described as being between 4 and 6 feet tall, occasionally a bit shorter or taller.

Variety – Fiction is usually pretty good about breaking out of the idea that fairies are all tiny winged sprite-like beings and instead including a selection of different beings. This is true to folklore, where the word fairy is a generic term for an Otherworldly being. Also fiction recently seems to be doing well using synonymous terms like fae along with various spellings of fairy, all of which are inline with folklore (fun fact there’s something like 90 different recorded spellings for the word ‘fairy’ in writing since the term first appeared.)

Time Shift Between Worlds – The fiction I’ve read does a good job of staying true to the idea that there is a time shift between our world and Fairy, which is very accurate to folklore.

Where Fiction Gets It Wrong

While there are a few points of actual folklore that make it into books there’s also a wide array of misinformation and plain nonsense that shows up as well usually not intended to be framed as folklore at all but simply the author’s storytelling and imagination at play. Honestly this is the bulk of most mainstream popular fairy books (and rpgs). Plotlines take precedence over folklore and the result is a good story that is disconnected from any actual folklore. I could easily have a dozen items on this list but I’ll stick to the most common ones I see that are both side spread and crossing over into pagan spiritual belief.

Multiple Named Courts – In Scottish folklore there are two courts of Fairy, the Seelie and the Unseelie; in other folklore there aren’t named courts at all. But its become popular in fiction over the last 20 years or so to expand the Scottish system, first including a third ‘wyld’ court then going further. One series has 7, while a popular RPG has more than a dozen. This is something I know for a fact is finding its way into paganism because I am often asked about it and run across people referring to ‘courts’ I recognize from specific books or games.

Whose In Charge? – Modern fiction has not only created new named courts but has also given new Queens to the existing Seelie and Unseelie courts of Scottish lore. These range depending on the story but Shakespeare’s fairy queens, Mab and Titania, often put in appearances. This is also highly problematic from the perspective of actual folklore where the Queen of the Unseelie court is usually understood to be Nicnevin and the Seelie queen is never named; putting English fairy Queens on Scottish fairy thrones is a lot of politics that are painful to even consider and speak of authors choosing names out of convenience rather than doing research. Some books choose random deities to head a known fairy court – usually the traditional Seelie and Unseelie – while in other cases entirely new beings have been invented.

Unseelie Emo Love Interests – Super popular trope in young adult urban fantasy and also edging into adult genres. The idea that the Unseelie aka the ‘Bad’ fairies, are actually the good guys and just need the right person to show them their good guy potential/save them/motivate them/whatever. Cue My Chemical Romance playlist here. The reality is that while the Unseelie are certainly more nuanced than straight up evil they certainly aren’t a bunch of eternal teenage boys looking for the love of a good misfit.

Important Humans – This one makes complete sense in a novel, because obviously in most stories the main character (MC) is going to be human and therefore obviously special and significant and get into magical adventures. So we see lots of stories where the human MC is absolutely pivotal to the local fairies, meets the Queen, marries the prince, saves the world, etc., The reality in folklore is that when fairies take an interest in humans its always for a reason and that reason is always to the fairies’ advantage. In some cases they would connect to human witches and teach them, true, but the witch always had reciprocal obligations. In most stories the human ended up as a servant, entertainment, or breeding stock. Basically in folklore (and reality) humans aren’t the center of very much.

Over Anthropomorphizing – Not physically but emotionally and mentally. In folklore it’s clear that fairies are very alien in their motivation and actions to human beings yet in fiction they often act pretty much like humans. This lends itself to an increasing idea that fairies are kinder and nicer than they often appear in folklore and also changes the way people approach interacting with them. In folklore they often seem cruel and it may not be that they are but that we are unable to understand their motivations most of the time. Like mice trying to understand house cats. 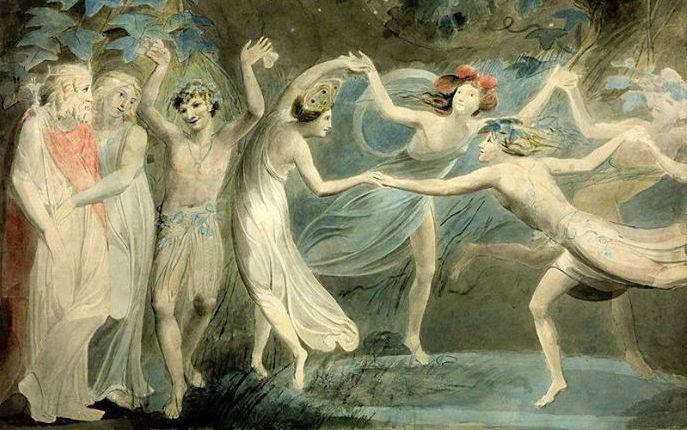 “Oberon, Titania and Puck with Fairies Dancing” by William Blake. From WikiMedia

I do think there are examples of good fiction that includes fairies which are truer to folklore. I’ve written previously about some of my personal favorites in a blog titled ‘Good Fairy Fiction‘ and people added more suggestions in the comments on that one. I would still however note that the best fairy fiction must always make some slight concessions for plot and characterization so that nothing is ever aligned completely with folklore; what we want in a good story and what we get in fairy anecdotes don’t mesh perfectly.

People often question why any of this matters, why we should care whether a belief is genuinely folkloric or pulled from modern fiction or invention. There is of course a fluidity to folklore that means today’s urban legend is tomorrow’s folk belief and sometimes today’s fiction becomes the folk belief of the next century. This is a particularly touchy question in modern paganism where people are often looking for any and all sources on a subject like fairies. But I think Nimue Brown sums it well in a recent blog, saying that there is a difference between being part of a culture and its evolution and being outside of it and taking material from it to use outside its context. Too often what’s being taken as belief from modern fiction is the latter, material that is disconnected from actual cultural belief and born simply as a plot device.

If you are seeking to incorporate belief in fairies into your spirituality, to approach belief in them the way the modern living cultures that believe in them do, I suggest treating them as you would a foreign human culture you are interested in learning about. And I would sincerely hope, to forward that analogy, if you want to learn about Ireland you would look to solid non-fiction sources and accounts written by people with first hand experience, rather than fiction. In the same way with fairies while fiction can be fun and entertaining we need to be careful not to blur that line and start seeing it as depicting actual folklore, because most of the time it isn’t.