The goddess Hekate is only rarely associated with the festival of Beltane celebrated by contemporary Pagans on the 1st of May.  This festival draws together an incredible spectrum of folklore and mythology from all over Europe into a vibrant and colourful celebration of the coming of Summer and perhaps most obviously, the fertility of the land and all that lives upon it.  In short, Beltane tends to be a fire festival celebration of sex and sexuality in its most pleasurable and fruitful manifestations. This is symbolised, for some, by the May Pole celebrations where dancers weave ribbons around a decorated pole – widely believed to be a remnant of an older Pagan tradition linked to fertility.  This presents a potential problem for devotees of the Goddess Hekate who wants to also celebrate the Wheel of the Year Sabbats – as Hekate is historically described and invoked as a Virgin Goddess, a maiden like her cousin Artemis with whom she is so often conflated.

In her essay, A GODDESS FOR ALL SEASONS the priestess Amelia Ounsted (published in Hekate: Her Sacred Fires, 2010) addresses this issue, writing that:

“… to regard Beltane as a Sabbat solely about sexual love is to limit the deeper meaning of the festival. Yes, this is an important part of Beltane, however, perhaps the power of Hekate’s connection to this festival is that she forces us to look beyond the surface and find the deeper meaning. For Beltane is as much about the fertility and transformation as symbolised by the sexual act as it is about the act itself. When considering Beltane and Hekate, a good place to start is with the colours associated with the Sabbat – red, white and green. These traditionally are seen as the red of menstrual blood (which as seen as the fertilising power of the woman), the white of semen and the green representing the life that came from their combining. These attributions come from the Alchemical texts and writings of the middle ages and earlier. Hekate is mentioned in the Egyptian inspired esoteric writings with Hermes Trismegistus and thus connected with Alchemy. It is worth remembering that the transformation of lead into gold by the Alchemists was seeking to transform the base person into the adept master. Therefore in working with Hekate (and perhaps in partnership with Hermes who after all is one of the few Gods she is supposed to have taken as a lover) at Beltane we can work on the transformation of ourselves and creating fertility and growth within our lives through the balancing of the masculine and feminine energies within ourselves.”

This opens up pathways for understanding and celebration, as do the other ideas Amelia wrote about – including work with Hekate on the liminal thresholds, doorways and also with the veil considered to be at its thinnest, work within the spirit realm.  I highly recommend Amelia’s essays as a starting point for Pagans who want to understand Hekate within the Wheel of the Year, or indeed for anyone wishing to explore the Wheel of the Year from a different perspective – her insights draw on both her research, but also on her deep experiential understanding. 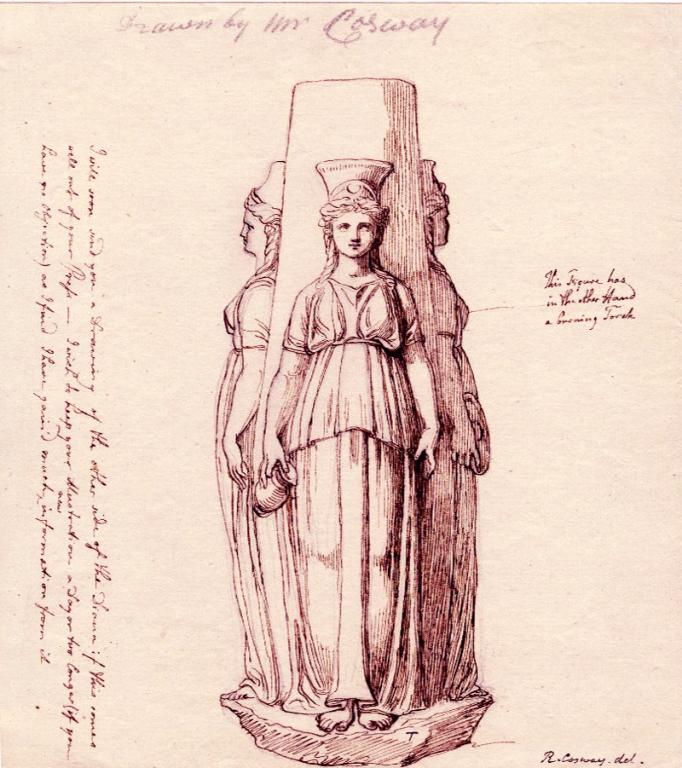 Triple formed goddess Hekate – the goddess is shown around a central pillar and also wearing a polos (stylised pole) on her head. Drawing by Richard Cosway (5 November 1742 – 4 July 1821)

There is another noticeable, but to date very overlooked symbol connecting Hekate to Beltane: Hekate’s Pole.  And no, I haven’t lost the plot – the pole is one of Hekate’s primary symbols, as crucial as her torches, whip, daggers, keys, dogs and patera.

“Hekate, when shown in her triplicate form, is most frequently depicted as standing around a pillar, with her back to it. On other occasions, she is shown standing on a pillar or column. Far from being just a coincidental decoration, the pillar appears in the context of depictions of Hekate so frequently that it undeniably has a symbolic meaning which points to historical influences.” ~ Circle for Hekate: Vol. I – History & Mythology

The pole has long been a symbol associated with Middle Eastern Wisdom Goddesses. David Rankine and I included mention of Hekate’s similarities with some of these goddesses in our 2010 book The Cosmic Shekinah, however we failed to recognise Hekate’s close association with the pole / tree at the time. This would further strengthen the suggestion that Hekate may have a somewhat more intimate relationship with the Wisdom Goddesses than she is usually credited with.  This should not be surprising considering the elevated position she is given both in early texts such as the Theogony and in the later Chaldean Oracles.

“From the common symbolism of the Asherah pole seen in the ancient Canaanite and Hebrew world, in such declarations as, “they set up for themselves pillars and sacred poles [Asherim] on every high hill and under every green tree; there they made offerings on all the high places” it is clear that the carved figure of a symbolic Tree of Life and then subsequently the glyph of the Qabalistic Tree of Life have always been associated with the goddess of wisdom.

Indeed the Tree of Life, or World Tree, is a common motif, found in numerous cultures such as ancient Egypt, Sumer and Canaan, as well as the biblical Tree of Life found in Genesis and Proverbs.  From these origins may stem the cosmological tree of life of the Qabalah, which has been equated to the Shekinah both in part and as a whole” –

But Hekate not only stands around a pillar, but she is also shown wearing the polos (meaning pole) on her head.  The polos is the short “hat” which she is shown wearing, tapering out on the sides and is believed to have originated with a tree or pole which became stylised.

Hekate is also sometimes shown with a pole-like body, not only when she is linked to herms, but also in depictions showing her with the pole-like body more often associated with Artemis of Ephesus, in the region which is now Southern Turkey.

“Depictions of divinities in the style of Artemis of Ephesus with a pole-like body represents another probable survival of the pole symbolism found in earlier mythologies. The goddesses Artemis, Aphrodite, Hekate and Hera are all on occasion depicted with this type of body which is indicative of the eastern influences on their cults.” – Circle for Hekate: Vol. I – History & Mythology

As a Goddess of Crossroads, shrines to Hekate was sometimes created at crossroads. As shrines do, they take different forms – which included Herms. These were typically shared stone pillars, sometimes with the head of a deity at the top (most often Hermes, who gave his name to these monuments!) and sometimes with male genitalia.  However, there are also examples of herms decorated with Hekate, one of which was found in the Ancient Agora of Athens.  Likewise, Hekate is frequently described or shown depicted as standing on a pole, pillar or tower.

Asherah, who is mentioned many times in the Bible (Torah / Old Testament) was worshipped with symbolic sacred poles.  These were considered dangerous and enough of a threat to the monotheistic religions that they were targeted and destroyed.

“The monotheistic reforms aimed at excising all other deities, particularly Asherah, are referred to in the seventh century BCE Book of 2 Kings, and were attributed to King Hezekiah (reigned 715-687/6 BCE) with the encouragement of the prophet Isaiah.  They include cutting down the Asherah trees or poles, tearing down the massēbôt or standing stones, removing the high places or bāmôt where incense was burned to other deities, especially Asherah, and breaking up the bronze serpent called Neshushtan used for burning incense:

‘He removed the high places, broke down the pillars, and cut down the sacred pole. He broke in pieces the bronze serpent that Moses had made, for until those days the people of Israel had made offerings to it; it was called Neshushtan’“ ~ 2 Kings 18:4-5, C7th BCE.
– The Cosmic Shekinah, Rankine & d’Este, 2010

So perhaps, it is time to put aside the assertion that poles are always phallic symbols, representing the male genitalia and the Masculine Divine. It might seem obvious to us today, but the pole is also a symbol of the Divine Feminine, around which devotion to her centred – and perhaps, still does.