When I was in high school I got in the habit of carrying a small pouch with some essential items that would be useful in any sort of magical emergency situation; if I remember correctly it included chalk, matches, cone incense, a tea light, salt, and a small deity figure. If you’re wondering why I felt as a teenager that a magical emergency kit was a necessity to carry around, well quite frankly it probably says a lot about the sort of teenager I was. The point though is that it always served me well, given my propensity for misadventures and getting dragged into other people’s magical drama (or starting my own) to have certain items on hand. I think it may also be a good idea to share here.

Over the years the subject of these emergency kits has come up in conversations with friends and I found out the idea wasn’t my own personal quirk but something other magically inclined people also did, although everyone’s version is unique. My friend Seo Helrune recently wrote about their own approach to the subject in a blog titled ‘The Magical ‘Go-Bag” if you’d like to see another perspective on the idea. I suspect that each person’s version of the kit reflects their own approaches to magic so if you decide you’d like to make one keep in mind this is about personalizing it to yourself, not doing what other people do. For those reading this that already have such a kit I’d love to see your thoughts on it in the comments section here.

Why Make A Magic Kit?

I suppose the most obvious question here is why does anyone even need a magical kit like this, and clearly no one needs it per se. It’s more something to have because it can make difficult situations easier or dangerous situations safer. If you are the sort of person who finds yourself unexpectedly needing to get other people un-possessed (gently), or do full exorcisms of spirits on the fly, or appease angry spirits, or bind or banish them then it’s nice to have the tools to do that on hand rather than doing it without them. And yes, of course, you can do all those things without any tools but why do things the hard way if you have a choice? Even if you aren’t looking at that level of spirit work maybe you want to have the means for protection, healing, or ritual magic on hand all of which an emergency magical kit could be tailored for. Really the use is entirely based on what situations you feel qualify as a possible emergency.

What Do You Put In It?

What goes in one of these kits is entirely based on what you are most likely to need, which will depend on the sort of magic you do and how you handle emergencies, as well as what sort of magical emergencies you might be likely to end up in. There is no right and wrong with this and you can always add or subtract items over time. My own kit has changed a lot since I first started carrying it as my approach to things isn’t the same as it was 25 years ago.

My current kit includes: salt, a hag stone, black cord, mugwort, steel, a bell, yarn, tobacco, matches, and a bit of silver. Seo Helrune has also written about what they include in their magical bag if you want to see what a different one looks like. If I were going to have any rough guidelines for this I’d suggest you should consider at least having things for protection, banishing, and offering. Don’t worry about what other people use for those categories and look at what works best for you then go with that. 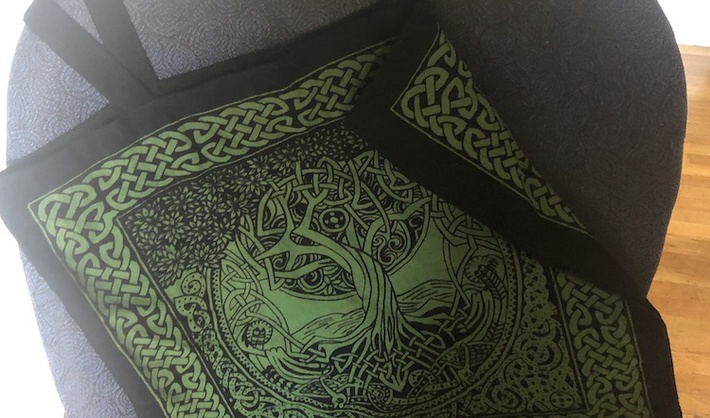 How Do You Assemble It?

How do you go about putting a kit together? The first thing to think about, in my opinion, is what you are going to carry it in because this will dictate how much can be fit. Of course you could also look at it the other way and get together everything you think you want to put in it and then look for the ideal carrier. Personally I use a small mint tin because its durable, sturdy, and easy to carry in almost any bag. I know other people that use cloth pouches, make-up bags, or small leather cases. It’s really down to what you decide on.

Once you have all the items together in the kit or bag, you just carry it with you until you need it. I don’t need mine often but it has come in handy often enough that I’m glad I have it. It’s a simple thing, inexpensive (mine is anyway), and useful, especially when you never know exactly when you might run across a situation that qualifies as a magical emergency.