During the Republican presidential debate Wednesday, most candidates could not name a woman who was not a family member or a foreigner to grace the $10 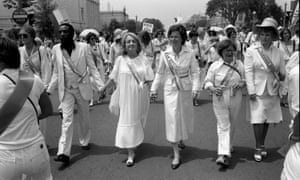 During the second Republican presidential debate on Wednesday, candidates were asked which woman they would put on the $10 bill. Most could not name a woman who was not a family member or a foreigner.

Mike Huckabee wished to give his wife the honor. Ben Carson believed his mother deserved it. Donald Trump named his daughter – at least initially – “because she’s been sitting for three hours”.

John Kasich and Jeb Bush named Mother Teresa (Albanian) and Margaret Thatcher (British). Carly Fiorina, the only female candidate on stage in California, did not name a woman, claiming that women were not a “special interest group” and saying placing a woman on US currency would only be a “gesture”.

According to the US census bureau, there are 161 million women in America, as of December 2013.

While the comedian and chat show host is not eligible, since whomever graces the $10 bill must be dead, Johnson was able to do something many Republican candidates could not: name a woman both American and not related to her.

“Not only is she kind,” Johnson said, “not only is she intelligent, not only is her entire platform speaking tolerance and equality for all and kindness but she’s able to be funny without insulting someone and I think that is an incredible feat.”

In case the question should come up again, the Guardian has composed a handy list of 10 women who deserve to be on the $10 bill.

Married to Franklin D Roosevelt, she changed the role of first lady. Roosevelt gave press conferences in which she spoke about human rights, children’s causes and women’s issues. She travelled to visit US troops. Following her husband’s death, she served as a delegate to the United Nations general assembly and was named chair of the UN human rights commission, helping to write the Universal Declaration of Human Rights. She also wrote numerous books, including This Is My Story (1937), This I Remember (1949), On My Own (1958), and Autobiography (1961).

Born into slavery before becoming a conductor on the Underground Railroad, Tubman helped more than 300 slaves escape to freedom and by 1856 was wanted with a $40,000 price on her head. She claimed to have never lost a passenger and was an advocate for giving women the vote. Tubman later became a scout and spy for the Union army during the Civil War, in which she was the first woman to lead an armed expedition.

A marine biologist and activist, Carson wrote the 1962 book Silent Spring, which documented her research on the dangers of pesticides and herbicides and helped spark the environmental movement that led to the creation of the Environmental Protection Agency. The book led to President John F Kennedy appointing a presidential science advisory committee to investigate pesticides; he ended up supporting Carson’s research. She was awarded the Presidential Medal of Freedom in 1980, following her death.

Remembered as a pioneer of women’s rights and feminism, Friedan released her book The Feminine Mystique in 1963. It explored the idea of women finding personal fulfilment outside their traditional roles. In 1966 she co-founded the National Organization for Women. After stepping down as president in 1970, she organized the Women’s Strike for Equality, drawing more than 50,000 women and men.

Stanton helped to organize the first major women’s rights convention, in Seneca Falls in 1848. She was the principal author of the Declaration of Sentiments, which was signed by 69 women and 32 men in attendance and with Susan B Anthony she formed the National Woman Suffrage Association in 1869, becoming its first president. She worked with her daughter, Harriet Stanton Blatch, to publish a two-volume critique, The Woman’s Bible, which argued that organized religion played a role in limiting women’s rights.

Credited with founding the social work profession in America, Addams was the first American woman to be awarded the Nobel Peace Prize. She co-founded Hull House, in Chicago, which inspired the creation of other settlement houses across the nation. She also helped establish the American Civil Liberties Union and was the first female president of the National Conference of Social Work. She later served as president for the Women’s International League for Peace and Freedom. She also published a book, in 1907, titled Newer Ideals of Peace.

Hamilton was the first woman appointed to the faculty of Harvard University, serving in its Department of Industrial Medicine. She was a leading expert in the field of occupational health and published numerous studies to raise awareness of dangers in the workplace.

Paul was instrumental in bringing about the passage and ratification of the 19th amendment, which gave women the vote. She helped engineer the Silent Sentinels, a group of women which protested in front of the White House six days a week from 10 January 1917 until 4 June 1919, when the amendment was passed. Paul was the leader of the National Woman’s Party and introduced the first Equal Rights Amendment in Congress.

Wells was a journalist and activist who worked to end lynching in the US, in the 1890s. After documenting lynching in America through her writing and leading a protest in Washington in 1898, calling for reform, she founded the National Association of Colored Women.