Last year, New York-based activist-artist Molly Gochman read an article about human trafficking, an issue about which she was largely unaware. It cited some dire statistics about this ubiquitous but often overlooked problem: Estimates say nearly 36 million people worldwide are currently living in some form of slavery, whether it’s sex slavery orlabor slavery, with 60,000 of them in the US; that 26% of today’s slaves are children; and that the number of slaves has increased in the past several years.

“I was appalled to learn about modern day slavery, and appalled that I hadn’t really known it existed,” Gochman tells Hyperallergic. “I reached out to several human rights organizations to ask what I could do to help. They all told me to ‘raise awareness.’”

Since lecturing everyone she knew about human trafficking would make her a “bummer at parties,” Gochman chose instead to educate the public via a participatory public artwork: the Red Sand Project. She’s asking the public to fill cracks in their local sidewalks with red sand, which she sends out for free in Red Sand Project toolkits, along with fact sheets about human trafficking. Why red sand, and why sidewalk cracks? Resembling scars on the sidewalk, these jagged red lines of sand are a simple visual metaphor for the millions of trafficked people who “fall through the cracks” and a reminder to not simply “walk over” this marginalized population. It’s also a symbol for strength found in numbers. “At first, human trafficking seemed like such a huge issue, and I thought I couldn’t possibly do anything about it,” Gochman says. “But these little grains of sand add up to transform these sidewalk cracks, and so it serves as a reminder that our small individual acts do add up to something.” 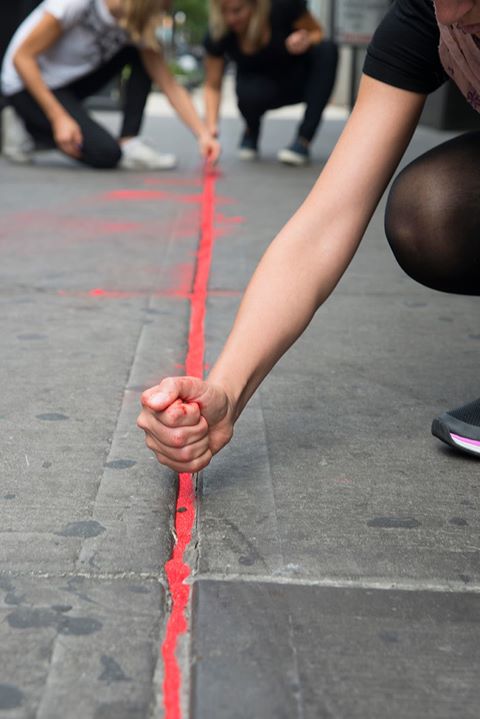 Gochman, who often works at the intersection of public art and activism, was inspired by the red and gray color palette of conceptual artist Barbara Kruger and by land artists like Robert Smithson.

The phrase “raise awareness” is thrown around a lot in activist circles, as educating the public about your cause of choice is generally considered an important step in building a grassroots social movement. But it can be hard to gauge how all this “raised awareness” affects actual change.

After learning more about it, I realized that the Red Sand Project is just a small way to bring attention to a world-wide problem. Not only did my daughter have fun putting sand in the cracks of our sidewalks, but she also learned that there are little girls just like her that have to work all day, or don’t have their own bedroom and toys to play with. Check out this video of Molly talking about the #RedSandProject:

If you are interested in joining Gochman’s movement, or learn more about what she is doing, check out her website.

We have to go to the bottom of why human trafficking exist. The root cause of it and cut it so it will stop growing. I know what pain is because I am a physician. I alleviate pain to my patients. I know what it`s like to suffer. There are millions also out there dying because of malnutrition due to poverty. While developed countries just do not know where to throw the excess food on the tables. I am from the Philippines, a third world country. There is so much killing due to drugs, illegal gambling. There is so much dying due to poverty. The gap between the rich and poor is so wide. That I can not just imagine the grave suffering of our people. This also includes, Thailand, Vietnam, Bangladesh and even India. So much suffering...

this blog is to make people aware of what is going on.  And to help spread the word.  There are avenues to take.  what it isn't is a way to spread your philosophy that everything is in your mind, so ignore physical pain.  Now perhaps you didn't mean it in those terms, but that is what it seems like to me.  Not everyone can just ignore the pain of their lives.  You only have that option when things are going more or less well.

Kidnapping & abducting is a crime. I am only a law abiding citizen. I am not a law enforcer. It`s up to the crime busters to catch the culprits. When captured sent to jail so they will not commit kidnapping/abducting children, women to be sold in the slave trade. So, why is this human trafficking continue to nurture? It`s simply because of these corrupt law enforcers who don`t run after these hoodlums who is into the slave trade because  men in uniform tasked to go after them cease pursuing after receiving bribe money.

I've seen people kidnapped rich or poor..... some run away and end up there.  Not everyone is sold.  You have a nice theology, very comforting as long as nothing happens to you are those you know.  It makes you feel safe and secure.  But you need to stop physical pain, abuse and turmoil, if you want people to feel your more lofty intentions.  The people forced into the sex trade, are not going to be able to say....'oh, the pain is in my mind, so I'll just ignore all this.'

The little girl just did not become a slave by magical chants. It`s her parents who are at fault for selling the child to slave traders. The reason is poverty. Did you ever see a rich child became a slave? The honorable thing  to do is eradicate poverty & this slave trade will be no more.

I don't see it like that.  It sounds like this is a way to remove yourself from a painful topic.  People still should not be subjected to slavery, abuse, pain....etc.  Tell the little girl forced into sex slavery and abuse, it's all in your mind, honey, so I don't have to help you.

Second chapter of Bhagavad-gita (2.20-25) describes characteristics of the soul:

"For the soul there is neither birth nor death. It has not come into being, does not come into being, and will not come into being. It is unborn, eternal, ever-existing and primeval. It is not slain when the body is slain. As a person puts on new garments, giving up old ones, the soul similarly accepts new material bodies, giving up the old and useless ones. The soul can never be cut to pieces by any weapon, nor burned by fire, nor moistened by water, nor withered by the wind. This individual soul is unbreakable and insoluble, and can be neither burned nor dried. He is everlasting, present everywhere, unchangeable, immovable and eternally the same. It is said that the soul is invisible, inconceivable and immutable. Knowing this, you should not grieve for the body." Participants are invited to fill sidewalk cracks with red sand or other materials, and then share an image of their transformation with the global community using #RedSandProject. These installations remind us that we can’t merely ‘mind the gap’ and walk over the most overlooked and marginalized populations in our communities – those who fall through the metaphoric cracks. These populations are most at risk of being enslaved, spending their lives being exploited for the profit of others.

This simple action might seem inconsequential, but small interventions build upon each other to make transformative change.

Today there are 36 million people living as slaves.

How will you help?

I've already done this.  I love what she is trying to do.