Last weekend in the garden...

Last weekend I was taking it pretty easy, my family set up the hammock in the backyard so I could hang out with them while they were gardening. 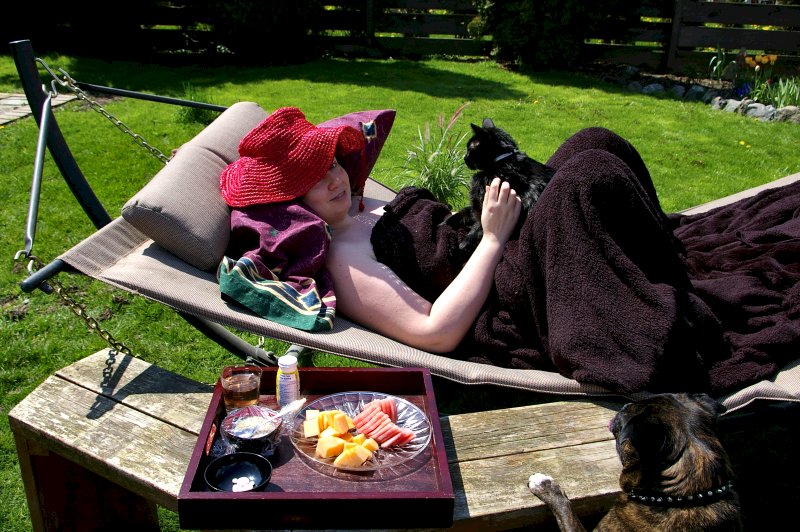 Just because you're 'bed' bound doesn't mean you're stuck laying around in a bed... I cruise between beds, couches, hammocks, hot tubs, and have been known to lounge on the ground... though getting back up from that is not always easy. The other puggy love was laying on the hammock with me much of the time, you can see her eye peeking at you from the other side of me. Luna is a big loungey suck, and was on the hammock a heartbeat after I was. Front and center is my strange little familiar scruff muffin of a cat... Loki. He was after some loving too, but mostly he was after my melon... he loves fruit and he was hoping I was going to share off my tray with him.

When he wasn't hanging with me on the hammock he was watching the birds. Of our three cats he's the least effective hunter... but he likes to pretend. He likes to pretend he's well hidden as he's mostly exposed... and will make ridiculous leaps at birds that are well out of reach, he has a very vivid... imagination. 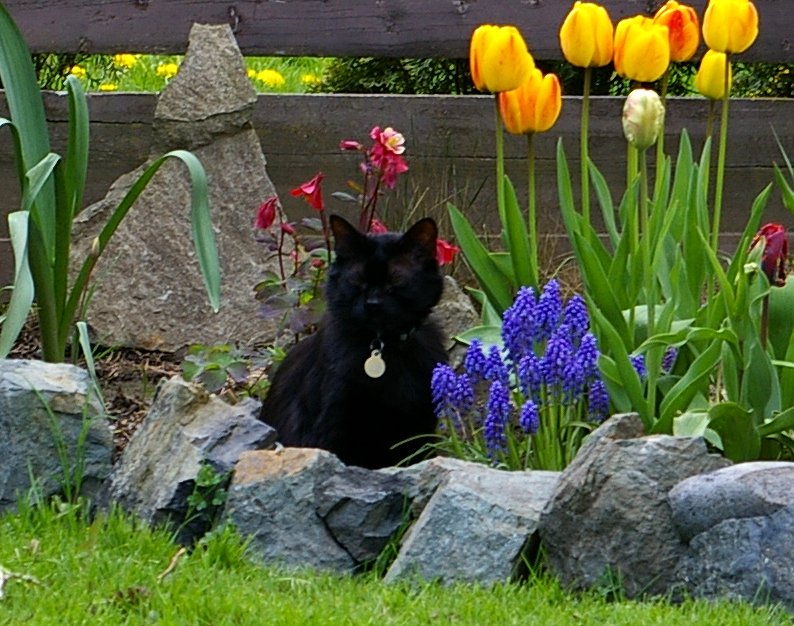 It's amazing how fast the day went, watching the pugs playing, the cats cavorting... and the birds singing, mating, feeding, fighting, nesting, and teasing the cats, and watching my husband Wolfe and his girlfriend ash gardening away as gray checked on me and made sure I had food, and drink, and meds... unfortunately even though ash brought me a hat, we forgot sunscreen, I didn't think I'd need it in the mild spring sun... but time flew by, and I did end up with a mild burn on my arms. Wolfe was busy tilling under garden beds getting ready for us to plant lots of new goodies in the garden this year, and ash was busy planting new plants we had gotten. 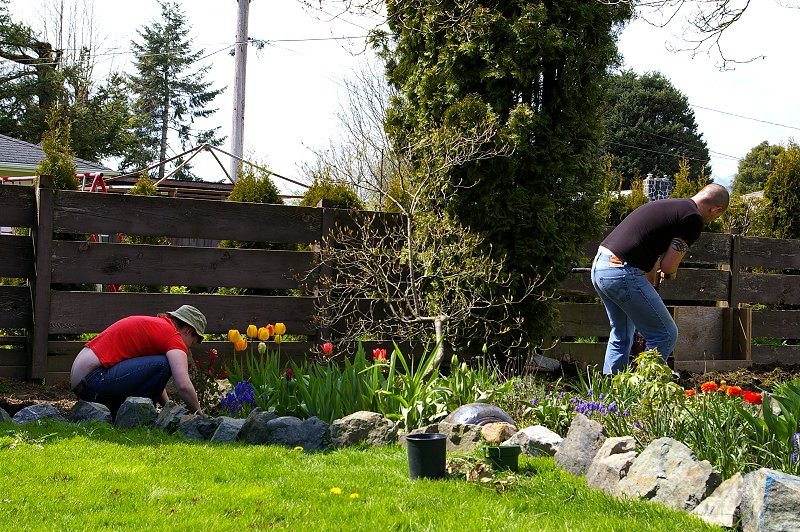 They're always asking for input from me as well, so I feel very much a part of the garden 'team'. :) I think my most of my time ended up being simply sky and tree and bird gazing. Maybe it's the feline in me, but the brightly blooming branches of the pink dogwood tree move in the wind so enticingly... 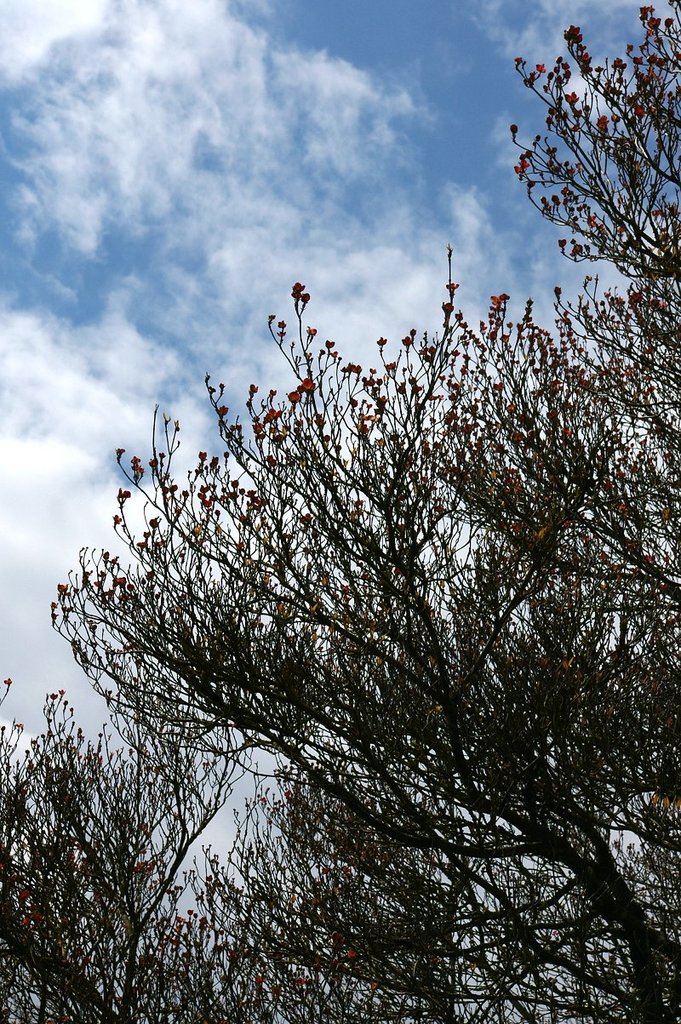 The buds are only starting to come and to open, but soon it will be covered in deep pink blossoms... ...and the birds are like living moving jewels, bright with song, their eyes always catching mine and the cats warily as they go about their day. 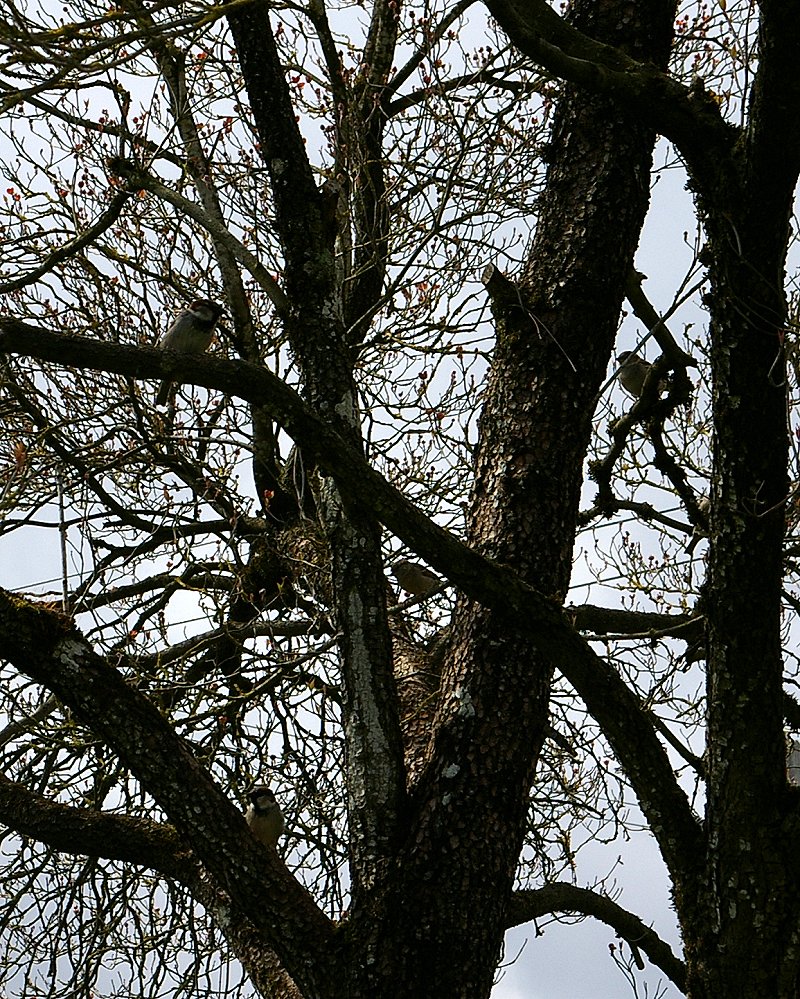 They're so clever for something so small and delicate, and so busy living. We have multiple feeders in the garden and the backyard is always absolutely bustling with bird life. They always cheer me up, like they're little messengers of peace and joy. I always think of the Bob Marley song, Three Little Birds, and in the song the birds bring the message "don't worry, 'bout a thing, 'cuz every little thing, is going to be alright'... 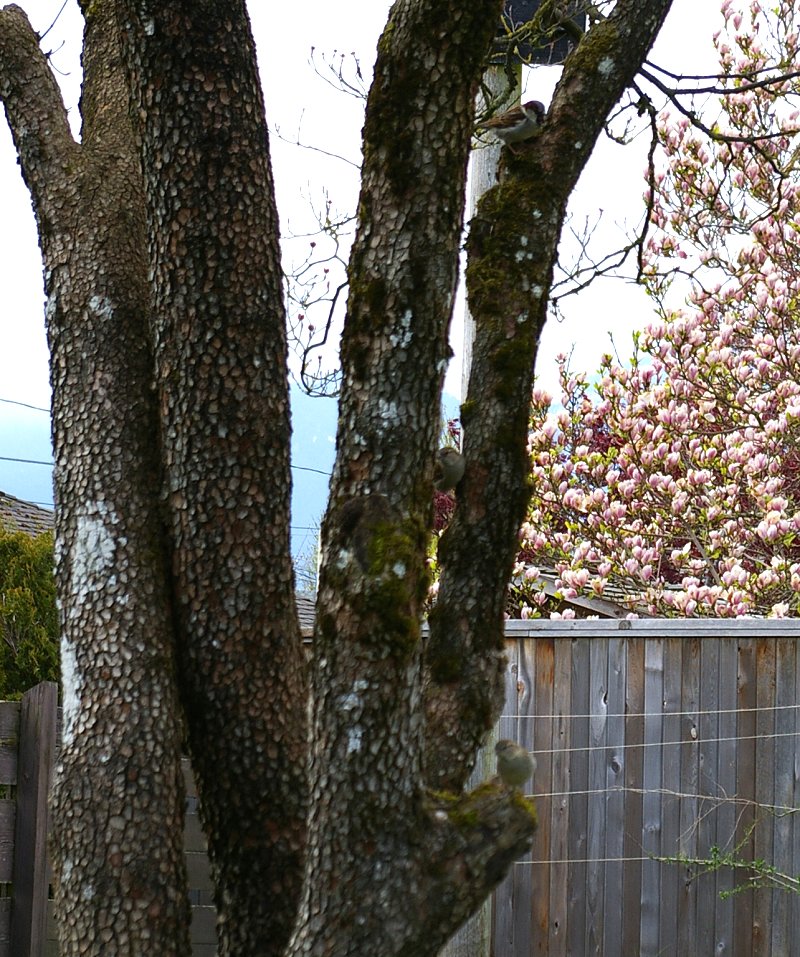 There's so many times, where I'll catch three birds in a row in my view somewhere, and the song is in my head and my heart, and in all the little chirps and tweets around me... silly, but sweet. I'm so in love also with the neighbour's magnolia tree in the alley across the way, I'm so grateful it's there. I wish the blooms lasted if you pick branches, but they don't..( yeah.. I may have pilfered a few magnolia twigs in my day). I was so tired this last weekend, sore, and pretty out of it to boot, lol. Going out to a Dr.'s appt earlier in the week and letting myself get too stressed over little things ended up giving me what fibromites refer to as a 'flare' which basically just means a flare up/increase in some of my symptoms. I try to pace myself as best I can, but when I have to break routine, I can get set back.

In the back of these pics you can see huge hunks of concrete, poor Wolfe had to dig and pull these 50+ lbs hunks from the ground, previous residents used as fill. If I were up to it I'd want to do something sculptural with them, but I'm not, lol, so their going.  I have to admit I enjoyed watching him move them, something about rippling muscles and sweat that appeals. the vine/tree/bush that's in bondage against the back fence there is a wolf berry, also known as goji berry. We planted it last year and had some berries right away, so I'm excited to see what it will produce this year, it's only just started getting all leafy and happy again with the spring. Do you see the two little cute tweeties in the tree? :) 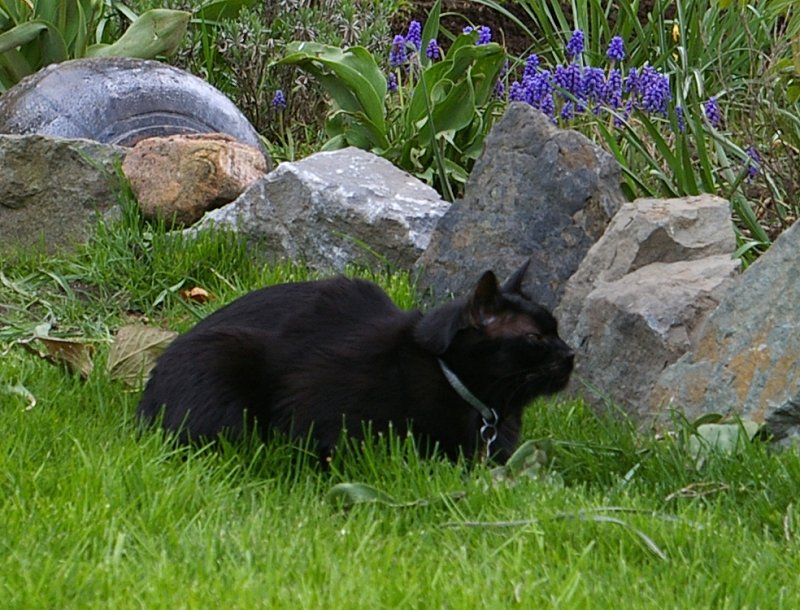 But don't worry for the birds... all the cats are belled, and they do manage to get one rarely... but not this cat... Loki finds catching leaves challenging. ;) Well, maybe not that bad a hunter, but he is a little, special, we tease him about it, he's a clumsier cat. 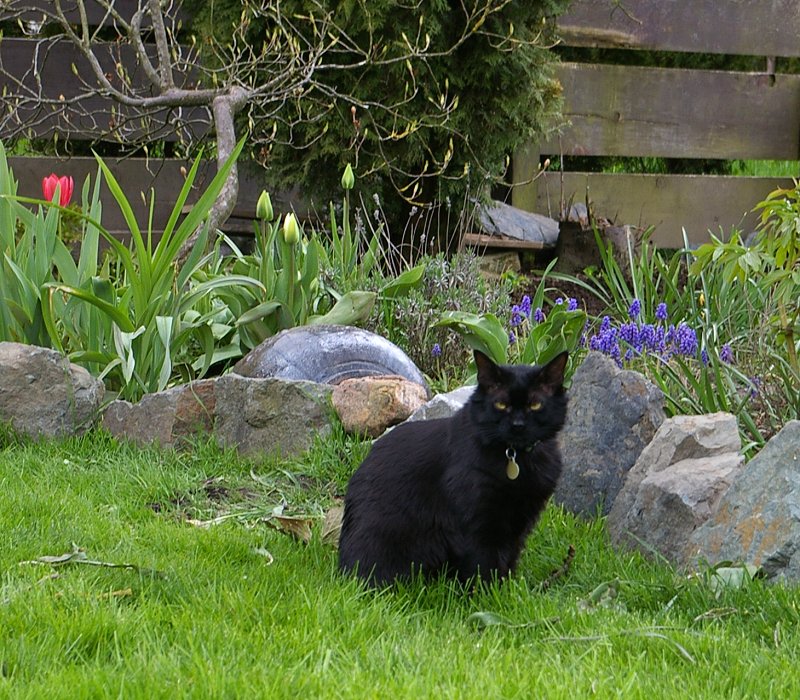 Which he tolerates... mostly.. since he's just a big sucky suck. I think I'm going to go hunt him down now for a snuggle, hope you've enjoyed the pics! Comment by Leila Raven on May 13, 2011 at 1:17pm
Thanks Lady of Set, you should see it -this- weekend, it's amazing how a couple of weeks can transform things. I'm so longing to take pictures, but I just don't have the energy physically to go do it. I did sit in the hot tub though and play photographer in my head. We have so many crazy coloured curly multi headed wild tulip varieties and other things going on. Maybe if I end up in the hammock in the garden again this weekend I'll try to take some more shots.

Comment by Leila Raven on May 11, 2011 at 11:29am
Karen, it's amazing just how hopeful they remain... they can 'hunt' for hours, day after day. the birds, each other... earth worms, lol. anything that moves. We're getting a 4th cat this summer I guess the antics will multiply!

fenz, lol, this hammock those side support bars/chains that keep it from 'tipping'... which is a necessity if you're sharing a hammock with cats and pugs leaping on and off of you. lol. :)

We've made big changes in the garden every year, the couple that owned the home before us passed of old age and had neglected the garden for many many years, we're planting a plum tree and an apple tree this weekend. :)

Comment by Leila Raven on May 5, 2011 at 3:55pm
thanks riggwelter, well it got me my CPAP machine, which so far hasn't been so helpful...lol, but I've heard it can take a while to get adjusted to it. :)