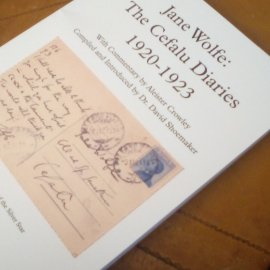 After graduating college in the mid 90's I spent a summer vacationing in Europe.  Before leaving for Europe I found a copy of Crowley's Book 4 on the clearance shelf of my local book seller.  I read it throughout my travels not really able to grasp most of it but I learned of the Abbey of Thelema and the death of a young man which led to Crowley being kicked out of Sicily.  I found this rather fascinating and decided that I would go and find the Abbey.   On a bright summer day and after paying a local to draw a map to it's location I stood unimpressed outside the Villa Santa Barbara.  Back then the roof was still intact, the windows and entrances weren't bricked up, the trophy hunters hadn't ripped the plaster off the walls destroying what remained of the artwork, nor was there a fence surrounding the property.  I tried to imagine what life at the Abbey must have been like but I found no answers.  Decades went by and my interest in the 93 current has ebbed and waned.  Then I stumbled upon one of Alostraels diaries from her time at the abbey and this renewed my interest.  Gathering more information I found Jane Wolfe in the cast of characters and that the Temple of the Silver Star had made her diaries from the Abbey time period available.  My curiousity got the better of me last week and I ordered a copy.

It's a pretty easy read as Jane typed most of her enteries.  It follows a strict format which can be a bit repetive as the same practices are done over and over again with varying results.  It's interesting to see her abilites and self control grow over time.   It also gives good insight into what Uncle Al was teaching his students.  As for life at the Abbey it's touch and go with some mention of key events and characters. Reading Crowley's notes in regards to Janes astral visions and yoga practice is an added bonus but only when you can make out what he scribbled.  I think if you are a serious student of  Crowleys this book could be helpful in understanding the "whys and what fors?" involved in his training method.   Like most of the material regarding the OTO and Crowley you'll most likely discover some new pearl of wisdom with each reading.