A few weeks before October 2016 had arrived, I had a dream in which I was somewhere in a modern times city, standing across a very business oriented street...

There were no traffic, nor many street shoppers walking by, and it seemed to be almost evening, chiefly when I had noticed the natural daylight and shadows, I could see many different shop windows, little stores across the street.

Then, of a sudden I saw across the street a different lady, a woman standing there in front of a shop whose door was closed, she was looking right at me, her face seemed to be overly painted, very pale and white as in make-up white, she was all dressed in white, her clothes hugged her body tight, she seemed short but her silhouette made her look very feminine and beautiful to my eyes.

For just a moment there, time seemed to have stopped, as we both stood still and we stared and looked right at each other, it was silent and deep.

I felt Her!
I felt attracted to her, and I began to walk across the street in order to meet her there.

But as I did walk towards her, she turned around and walked steadfast to the side door of this closed shop and she disappeared as she entered, leaving the door ajar...

I hurried to catch up with her, as I approach the half-closed door, I opened it door in full and I entered this room which was dark.
But as I passed through the door, it was as if somebody had instantly switched the lights on and then I saw this small table dressed with white table cloth, in the middle of it, standing was was a small statuette of the ancient Pagan Goddess Ashtoreth.

I knelt in front of the small table which reminded of makeshift altar, so that I could take a closer look at the statuette, lo and behold, and I knew, I recognized her, I've instantly realized who she was.

She was one and the same with the lady who was standing outside looking at me. She was actually the lady who had just entered that room.

I knew I was in the presence of a Goddess, I told her mentally - I love You! And I felt a tremendous warmth and very good feeling as I woke up.

I had studied the Goddess Ashtoreth when I was younger but I never had any close connection with her at all in this present lifetime, not until this dream connected us.

I do freely and willingly welcome dear Goddess Ashtoreth in my life, in this lifetime. 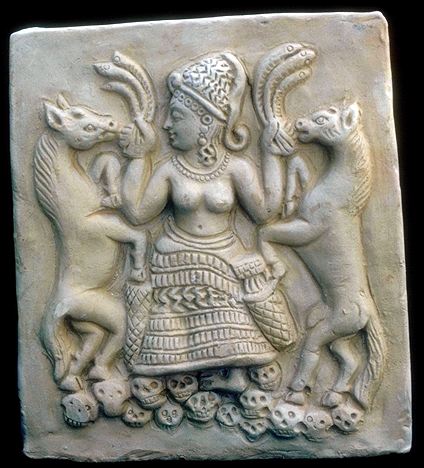 She is seen as a "Babylonian, Canaanite, Semitic, etc... Ancient Pagan Goddess and so forth...

To me, She is a Goddess and equally to this Species a.k.a. Human Beings!

Ashtoreth also known as Goddess Astarte (Womb / She of the Sacred Womb) a.k.a. Goddess Ishtar a.k.a. Ashtoreth a.k.a. Ashtereth and lastly, a.k.a. Athtarath (meaning "Shameful Thing" because the vowels were on purpose modified by the spiritual-dualistic, patristic/patriarchal and anti-women "Hebrews", and because of their wilful ignorant and at times, intellectually dishonest Prejudice, Bigotry and Hatred for Women's Rights and for the Goddess' precious "Freedom of Sexuality".

There were plenty of switching letters and pronunciation of words in order to defame Ancient Goddesses and Gods...

Pagan Gods such a Baal, was compared to Lord of Flies as if referring to a Lord of Pests, filthy God which feasts on excrements/shit...

And in other words, something dirty, shameful and undesirable, and ergo the absurd & ridiculous appellation of Beelzebub for dear ancient Pagan God Baal.

Of course, there were no Christian Beelzebubs at all, none, not one!

Except, for the entertaining bullshit of the wilful ignorant and/or intellectual dishonest people who invented this rubbish and those stupid enough to subscribe to it!

Ashtoreth is She who conceived, but did not bear offsprings to Her lovers.

The Godddess ASHTORETH is a Goddess of Many Names, Plural Manifestations throughout all time, all places, from the very beginning of all existence, of all life, of all creation.

Ashtoreth's Colours are white and green and/or, red and black. The acacia & cypress trees are sacred to Her.

Strong Horses, lions are sacred to Her too.

Star inside of a Circle is one of Her generic symbols.

Horns are also Her symbols, She is Goddess of the Crescent Horns, a Horned Goddess of Fertility, of Wealth, of Good Health, of the Pleasure of Good Sexual Happiness...

Horned Crescents, Small Birds, Doves are sacred to Her.

Lunar / Moon Goddess and also Feminine-Star/Feminine-Solar Goddess!
Skyclad a.k.a. Naked in Her Rites/Rituals was always sacred and welcome by Her.

The (Astrological) Ancient Royal Star ANTARES is sacred to ASHTORETH

Goddess of the Power of our Mother Nature, She whose Nature is a part of all Her Creation.

Ashtoreth is a dear Ancient Pagan GODDESS - A GLBTIQI + / Non-Binary /  Pansexual & Hetero Oriented Goddess whose Worshippers in the past, some did cross-dress & had GLBT & Hetero oriented Great Rites / Sexual Unions / Sacred Marriages at Her Altar and in Her Honour!

Diversity is sacred to Her!

ASHTORETH - THE MUTUAL RESPECT FOR ALL DIFFERENCES, THE FOUNDATION OF ALL MEANINGFUL EMPOWERED FREEDOM OF EXPRESSION, OF THINKING ARE SACRED TO THE GODDESS ASHTORETH.

When it comes to dear Goddess Ashtoreth folks, I do mean it, I do adore & love Her very much!
Blessed Her Be! 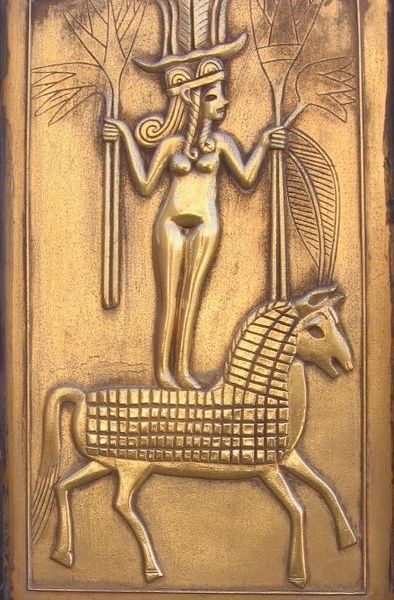 NOTES ON ASHTORETH:
*
A quick Universal / Academic check-up-facts study / googling and it is quite easy to find and establish that the ancient pre-Jewish, pre-Christian Pagan Goddess Ashtoreth predates both the Inventions of Jewish Mythologies and Christian Mythologies.

And to be honest & clear, She has NOTHING to do with any of Them at all.
But She has been vilified, maligned and modified in order to suit the New Religions of the time and their socio-politico-religio-commercial interests, greed and desire to rule the world.

She - ASHTORETH has nothing to do with Abrahamic Mythological Titles such as Lucifer, Satan, etc, or with mythological characters such as Demons/Demonesses or Devils after the Jewish, Islamic and Christian Mythologies and their Religions, etc.

To me, for myself, I know that the ancient Pagan Goddess Ashtoreth, the ancient Pagan Fae / Elementals / Pomba-Giras & Exus, different Beings, different Species, different Intelligences, etc, they all found a sacred way to survive the primitive times and keep their Expression alive in our world and time-bands by adapting to the primitive belief and languages / cultures of the times, ergo from Goddess to Demoness, to Fae, to Pomba-Gira, to different Species yet to be labelled and written about.

Life / Existence is eternal and infinite, but it is made of CHANGE.

The SEED of infinite and eternal EVOLUTION is present and within all Creation, within us all.

WE ALL SHARE IN THE EVOLUTIONARY JOURNEY THAT WE PERCEIVE AS EXISTENCE, AS LIFE, AS BEING INDIVIDUAL. BUT WE ARE COLLECTIVE WITHIN THE INDIVIDUAL AND INDIVIDUAL WITHIN COLLECTIVE.

This, it explains natural alchemical union / marriage / sacred rites between all different Species, our Interactions, our give-and-take, our beginnings, middles and endings... And our infinite and eternal "begin-again"

If you do not understand, don't worry, you will.

There are many lifetimes, many journeys from cradle to grave and we all evolve, evolution comes to all, no exceptions at all.

One may surely choose wilful ignorance, or intellectual dishonesty in order to avoid the facts when they may come knocking at your door. But they're still the facts, folks!

I simply adore this dear Goddess, ah Ashtoreth, I LOVE YOU !!!

We're all proud Lucifers a.k.a. Bearers of Light a.k.a. "as bright and shining like the Morning Star/Planet Venus in the sky" when we discover our very own Light.

When we dare to love and to respect our very own selves first... And then others too.

When we're willing to shine and to become the sole Owners of our own Directions, of our own Paths.
After all, do remember that we're all made of CHANGES in this or in any Elemental World.

And of course, when we go home, all we take back along with us is our LIGHT.

Thank you! Goddess-Blessings To you too!

Thank you. This is beautiful. All She wants if for life to continue, to spread happiness, healing and wisdom. She wants you to be happy and fulfilled. You are precious and beloved. May you be Blessed.

Ergo, yes, it is easy to find confusion when it comes to the Pagan Goddess Ashtoreth, or any other ancient Pagan Goddesses and Gods.

Best wishes in your search!

The Phoenicians believe in the trinity with Baal, Ashteorth, and El. El had been promiscuous as Ishtar is the Queen of Heaven. When you tie it in with Marduk, you see she becomes affiliated with Babylon. Ashteorth is a complex dietey because of how she associates with the hunt, war is in her blood. Of course it's deeper than that, and I do appreciate this. Very informative!

Comment by Mystic Wolf on August 10, 2019 at 3:34pm
Thank you for the great information here on Ashtoreth

Patriarchal / Spiritual-Dualistic Mythologies & their so-called Religions, they all started humble, penniless, weak, small and unimportant! But once they had forged some Socio-Politico-Commercial support, they've spread their massive weight of bullshit all over, from mass-killings/bloody-wars, to unfair laws to control the population, their thinking and their freedom of expression! They've been, they were awful, brutal and blatantly anti-humanity, anti-Women a.k.a. Women-haters & anti-GLBT just as well.

I am not too surprised at all - Al-Lat (Arabic: اللات‎, Romanized: Al-Lāt, pronounced ( al (i) la:t (u), also spelled Allat, Allatu and Alilat, is a Pre-Islamic Arabian Pagan Goddess worshipped under various associations throughout the entire Peninsula, including MECCA where she was worshipped alongside MANAT and AL'UZZA. The word Allat or Elat has been later employed to refer to various/other Goddesses in the Ancient Near East, in other to confuse Mythologies the worship of the Creatress Supreme Being Goddess. These other Goddesses  do include the goddess Asherah-Athirat.

Whether Christian, Jewish and/or Muslim, their paths, their mythologies do require people either not to know, or simply to ignore a vast body of academic materials from world religions, to world history... And to forsake good world culture, good/logical/reasonable world-common sense and to avoid intellectual honesty by all means.

My answer is, Evolution (Eternal/Infinite Evolution) does come to everybody, whether sooner or later. And it will visit Christians, Jews and Muslims.