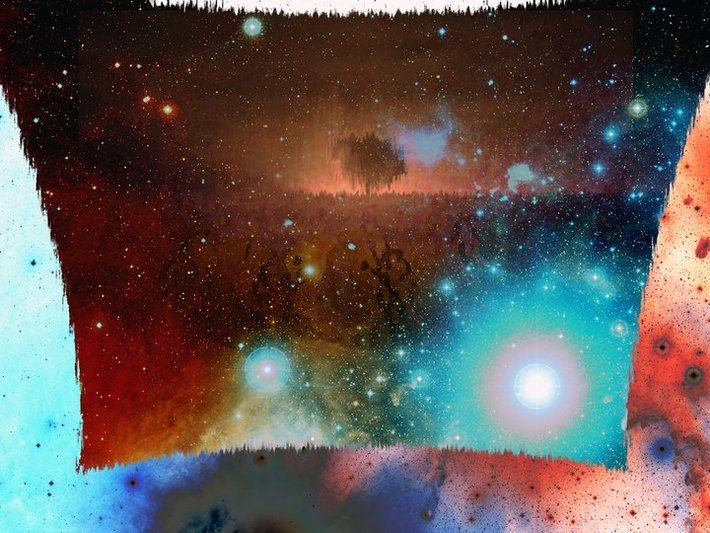 The solar eclipse, who marry the "Miss."

To create, the mist, the rain that falls.

The Sun gleams, the leaves that fall.

One more month, until summer turns into fall.

In which, the Moon, encapsulates with love.

The rainbow above as sweet as a dove.

The Orion Nebula is the location for the Church.

The Bottomless Pit, so sound, and so smooth.

In which the blueprint laid out with blue clues.

The pentagram that ignites, the blood then boils.

The skeletons that decompose in the fresh like soil.

Cooking up the beat, we found out what's true.

An Shiite Assassin Sect, who steals their "food."

A crew that targets those that "shine."

A sniper shot ready, when they begin to lie.

Fly for comfort, the eagle swoops down.

"Meow" so sweet, the Urmah then buys.

In Alnitak, where our God that rests and resides.

Then with the beat, we change the demand.

Mise well look down, while doing a head stand.

The fire that smothers all souls lost.

Having to buy a group of people at a subsidized cost.

Having to teach, the blueblood then flows.

Blood spill from a heathen, the red then glows.

All for show, they want to be known.

The Koran, that shows, and amounts to a loan.

While riding in a car, they sleep after ingesting NyQuil.

No more fronts, their "bread" not solid, like gold.

Time to upgrade, the Earth to and fro.

On the low, the boat, Noah's Flood part two.

The Covenant with man, the Rainbow then grew.

Made a pact, with blood, can't you see?

As sweet as when a Queen who becomes a honeybee.

For free? Yeah, right. You must pay off your debt.

And they continue to fret, with no gold to invest.

Upset, the victims, they are in their heads.

Laid in a casket, after their pronounced then dead.