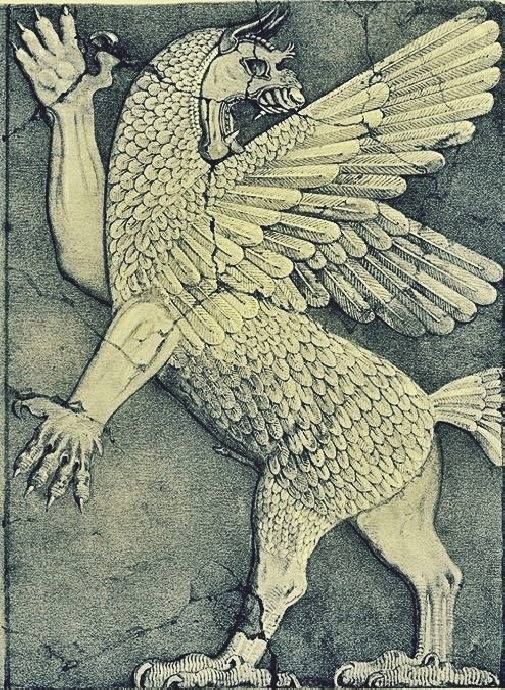 With rights, with lights, we fight the good fight.

The vampiric bite, a mirror effect, with the bright like lights.

At night, we bite, we seek the immortal life.

All in, on a blood oath, we prick with a knife.

A sniper head shot, they're all in our sight.

Ignite, in control, we land on the ground.

The Imdugud, from Mars, we're from uptown.

Ministering to the humans, in which, we're eternally then bound. Funny that you say that. As I believe there is no coincidences, just like you saying that to me. Small world, eh?? ;)

Oh I wanted to also mention I have a friend who is really into Quetzalcoatl the feathered serpent deity like the Watchers you quoted in the article you linked.  He also has a great affinity for Poimandres, the great dragon.  This all started after he became a freemason.  Hmmm...go figure huh lol.

Intriguing information.  Thanks for sharing and for the link.  :)

This is the link: http://genesis6conspiracy.com/chapter-81-serpents-and-dragons/

The dragon/serpent/crocodile was the most appropriate beast pantheists could have devised for their messianic kingship, reflecting allegiance to Satan and seraphim angels. The New Testament In Today’s English notes the dragon is thought by modernists to be an imaginary beast, understood to be like a huge lizard, which is also called a serpent, appearing in the Bible as the devil, 31 thereby also connecting Dragon kingships back to their sponsor, Satan. The antediluvian dragon/serpent was then the majestic animal of kingship before Eden. And after that, it was employed as an allegory for the kingship sponsored by seraphim angels, which was once more lowered from heaven to earth, both before and after the flood, to the descendants and followers of Cain and the seraphim- like Nephilim, by serpent- like angels.

Dragon mythology has worldwide appeal. It permeates all cultures. All cultures have a name for dragon , even though the animal cannot prove itself to have existed. Dragon- like monsters unexplainably appear in remote cultures such as the Hopi, Huron, and Zuni. Mythologists Calvert Watkins and Joseph Fontenrose view the enduring patterns of dragon mythology as the fundamental myth plot of Western civilization, the story of stories, while Fontenrose further advocates that dragon mythology is an expression of an essential, cosmic dualism (polytheism). 32

Drakon was the Greek word for dragon, meaning “serpent,” just as the ancient Sumerian words Usumgal and Mus- Usumgal translate as “serpent” and are metaphors in praise of gods and kings. The ancient, holy crocodile was known as Draco, the mighty dragon of kingship, whence the title “Pendragon” (head dragon) was contrived in the Celtic British kingdoms, 33 and from whence the Roman word for dragon, draco , derived. 34 Draco is Latin for “dragon” and derived from the Greek word draconia , which was originally described in antiquity to be a serpent- like creature with wings. Furthermore, draco derived from the original drakon , or draconta , which alternatively translates as “to watch” 35 in the spirit of infamous seraphim watchers , the angels that bore wings. The angelic posterity, the Nephilim/Anunnaki were remembered in antiquity as watchers , rulers, and kings and all appeared like serpents/ dragons. Moreover, variant forms of reptile serpents with wings likely thrived before Eden, as well, suggested by the fact that numerous legends recorded wings were removed from the serpent, along with other body parts.

The dragon, too, was an ancient symbol for power and heroes 36 adopted by the antediluvian and postdiluvian kingships. Jonathan Evans notes dragons were symbolic wonders of the world, and Tolkien describes them as part of the perilous realm of faerie: fairy tales, fantasy literature, and imaginative fiction. 37 Our literature and entertainment overflows with covert allegories cloaking intrigue. Seemingly, the dragon was the key metaphor for patriarchal bloodlines (male), while the fairy represented the matriarchal bloodline (female).

Yeah the original Watchers are really from Draco. Draco means, "too watch." They are half eagle, half lion Angels. These are the Imdugud. They were created on Mars, then sent to Earth before the flood. Being a watcher is more about differentiating the truth from fiction. These are the fallen Angel's, they're basically death angels. They record everything that humans do and report back to the Elohim.

The watchers kind of creep me out.  Not so much the ones from the Book of Enoch or movies but the weird feeling of being watched when no one is around, or the criminal peeping in windows or hiding cameras in bathrooms or dressing rooms, or the hacker who hacks your in home camera system or pc camera.  Funny how entertained we are by watching, I wonder if we adopted that behavior from the extraterrestrial watchers I mean we did watch them do these wondrous things that have allowed us to  flourish and break away from being part of nature to using nature for our benefit or downfall.  We went from being watched to being watchers ourselves.