Initially written and published on the 18th November 2011

An astrological WALK-IN CHART is a chart drawn/cast for the moment which another Soul/Being and/or a different Species has successfully entered somebody's present flesh/body in order to stay and to finalize the present cycle of that lifetime in matter/in the flesh and/or to pass a period in it until another soul/being or different species ( pre-scheduled to come in and shall come and to enter that body/house/vehicle ) will take its place, etc...

There are People whose body is meant to be / to become what I call "Legions".

Which it simply means it is like a Merry-Stay Vacation Hotel with Many Walk-ins of Different Kinds varying on Nature, Soul Group, Being and/or Species...

These Walk-ins have all been mutually Pre-Natally agreed-upon by all parties ( all souls / beings and/or, all associated species ).

And even though it happens in a lot of Localities / Countries which have a strong socio / religio / politico conditioning / programming for the minds of their people.
I mean, in locations whose local Cultures make sure to attempt to keep most of the people primitive & willfully blinded by the FEAR.
I mean the sort of fear which is always imposed by the so-called Great Myths, with their invented Zoroastrian / Spiritual-Dualistic rubbish / bullshit - The very stupid and useless battle of evil and good for instance, the invented personifications of the what / who our Species qualifies/deems as good / benign, and what our Species may deem as bad / evil, etc and ad nauseum.

- None of the walk-ins are evil or bad.

And that it is so, regardless from/of the narrowed-minded and limited / censored (primitive and ignorant) perspectives of "one lifetime at a time" Awareness / Consciousness of / for most people on Earth.
"Human Beings" are a Species whose much needed evolutionary Quantum Jump is yet to come in some Future Time-Band, in some Other Incarnation / Lifetime either here on Earth or some other place in the Universes.

The fact is, the people, the observing ones, it turns out that the Observer, folks, he/she has not been equipped with the wealth of world Culture necessary, and they have not been equipped with the associated / proper Information, nor the Willful, Intelligent Wisdom of the actually Proven Experience of the Facts, in order for them all to make truly well-informed, Cultured & Well-Educated Definitions of what they are attempting to explain.

The Observed most of the time is more advanced and far wiser than the so-called Observers!
Sorry, folks but it is true.

So what you and the most people commonly get are Explanations which are fancifully all-dressed-up in made-up / invented / bogus Religious / Mythological, primitive Ideas & Ideologies which are ever so quick to qualify everything into the pea-sized / moronic spoils of "Saviour, Martyr and/or, Victim" labels, within the boring "evil versus good", good old-bullshit of moronic / biased / prejudiced Belief and Language, and their associated Values and Ways of Conduct!

The real facts, are in fact, devoid of all that jazz of the mainstream big and rich Religions, and devoid of the stupid 1% world Minority Elite, who use their Fear-driven invented "Belief and Language" in order to control the Speech, the Thinking and the Actions of the World Majority of the People of/from this Species/World/Time-band, whose lifetimes are like houses / hotels / vehicles for Other Souls / Beings, Other Species as for instance, Elementals just trying the "Human Being Experience" for the first time around.

A lot of these Others Species do not know the meaning of Fear in the way which average people have been conditioned to know.
A lot of them, they have been around a bunch of Lifetimes and they would know a little...
Ergo, these first-timers Souls / Others Species coming around, they choose Fantastic Endings, or rather, situations which are ordinarily perceived as BAD and HORRIBLE experiences, chiefly when seen from the Elemental Perspective of the Flesh, of/for those who are in the Elemental Flesh, incarnated at the moment.

However from the perspective of the Eternal & Infinite Soul, such it is all just a mere flash in the pan, it is a blink of an eye.

No ending ever ends anything, it is all about changes for all and in all that exists.

Nothing gets damaged, broken nor destroyed, it simply changes and it will come back again to visit that shape, that experience and without a scratch. LOL

The so-called Emotions which allows us all TO FEEL so many Things while we are within the Elemental Boundaries of the Flesh will change once WATER, a different Species Itself moves out of us, and we're back to our natural Primordial State of Being LIGHT - an Eternal Spark of Light from the Womb of the Ultimate Supreme Being Creatress Goddess of All.

By the way, Fire is the Element / Exu / Elemental / Fae & the actual Species closer to our true Spiritual Nature.
Believe it or not!
Many times before, I had myself walked in the very shoes of all Four Elements / Elementals in different times and places. And I understand Their Nature as if it were My very Own!

While Water's nature is closer to our Physical Nature when Modified by/in Flesh.

Air and Earth also own their belonging parts in our evolutionary journeys from cradle to grave and back again via Death & Rebirth into a New Body a.k.a. vehicle, vessel.

However, come what may, for the sake of these Time-bands and the many different Earths of many, many different Universes, the body is always made up of the same Four Species who are journeying along with us in the roads of eternal and infinite Evolution.

This Evolution which originates / comes from the sacred Womb of the Supreme Being Mother Nature / Divine Ancestress / Goddess Creatress Herself.

There are many kinds, and also many levels of "Possessions" when it comes to the Interaction of this Reality and the Other Realities a.k.a. Realms, Other Time-zones, Other Time-Bands and of course, Their Energies, their Beings, Their different Species / Existence, etc.

If a Possession assumes or becomes an Anti-Evolutionary Vibration / Act / Situation, then it is corrected with Mighty of Nature Herself, and all the Participants will self-correct because they will be made to feel, to understand and to know what they did and they will be made to surrender to their own Evolution via their Progress, Awareness and Perception of the "Bigger Picture", beyond the Lifetime in question, beyond the local in question, beyond the Belief and Language acquired during their journey in the Elemental Flesh.

Very different though, from the many Cock-and-bull Stories and their "Good versus Bad Dualism" bullshit, their Hells and Heavens oriented mythologies of the world big / rich mainstream religions.

It is not like the socio-religio-commercial-politically-oriented and corrected Contents of books, of TV Shows and etc...
Sorry, folks!

The best thing about Walk-in Charts is that it must be confirmed in the actual Natal Chart of the birth of that Body which is serving as Host for a Walk-in or for many Walk-ins.

Whatever we manage to do while in the flesh of this Species a.k.a. Human Beings and in joint-evolutionary-partnership with Other Species such as the Elements / Elementals / Fae / Exus / Pomba-Giras & Their Infinite & Eternal Elemental Kingdoms, it is, it was ALLOWED / PERMITTED TO BE TO HAPPEN THAT WAY, even if we should choose to disagree, even if we do not like nor understand.
It will always be that way (Only The What/Who which are Allowed / Permitted to Be, will in fact Be!)

Nothing happens which it is not a part of the Pre-natal Choices of the Souls associated with the Event / Action, Person / Species / Elemental or Thing.

What makes sense to the Soul, may not make sense for the censored / limited PERCEPTION of "one lifetime-at-a-time awareness / consciousness", of the incarnated particle of the soul which is incarnated, and/or the spirit-inside-of-the-elemental-vehicle a.k.a. body.

The Incarnated Soul with Her/His Body, they make Wishes, oh yes, but the Non-Incarnated Portion of that Soul along with Fae / Elementals / Exus / Other Species, they make DECISIONS.

We as Souls/Lights, we cannot stop nor avoid our very own EVOLUTION.

The eternal and infinite Seed of/from the eternal & infinite Ultimate Source of All/Everything and All Existence, it is inside of our Light / Soul and a part of it still follows and stays with us ( with that part of us that incarnate ), we are never Alone, we are never Severed / Separated from the Ultimate Source Of All.
It pays to know THIS from the heart because unwanted Umbrals / Astrals / Realms will have no hold on YOU.

During our evolutionary steps, we all do what we can in order to try our Free-Will, our Freedom, our Blessings... But we soon discover that Freedom without Wisdom is Meaningless because it has no Empowerment in order to be Useful and Relevant.

To roam the Earth from body to body without the benefit of birth, life, death and rebirth, such a shortcut leads nowhere, folks, many have done it without really getting what they thought that they were getting.
And the souls will learn and know all of the pain that they have inflicted upon Others and they will self-correct Themselves as the heaviest and deepest Blessing of Eternal and Infinite EVOLUTION takes over, always wins and it grows until one can only surrender to what one is made of, CHANGES. And then we all evolve!
Been there and done all of this before.

Magick is best served when it is empowered by Freedom with Wisdom.

Freedom is best served when it is empowered by means and resources in order to be effective and meaningful.

Quantum Academia and Ancient Academia shall meet as one someday and they both shall affirm the very same.

I've enjoyed my sharing of what I can, as always.

Bless me - Dear Supreme Being Divine Ancestress Creatress and thank you for abiding in me and for letting me abide in You, oh eternal and infinite Ultimate Source of All. 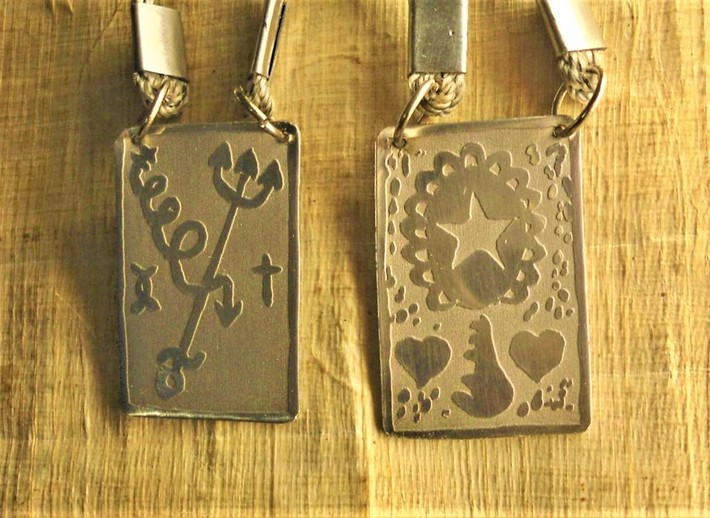