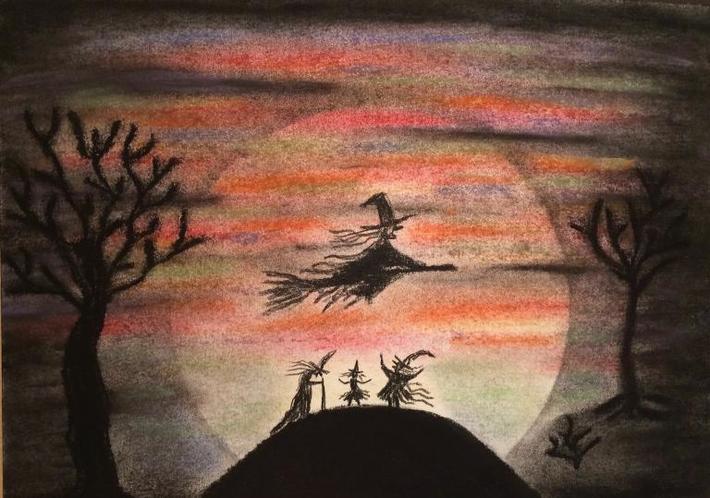 So, as we near the end of April there is a Spring celebration coming up — Beltane and Walpurgisnacht (Walpurgis Night). Today, I have decided to take a look at Walpurgisnacht. What is the history behind the observance and why might it be important for me as a Witch?

Walpurgisnacht: A Brief Snapshot of History.

Most people enjoy gathering for a feast or party from time to time. In ancient days, such a celebration often centered around finding marriage partners, making babies, planting, and harvesting. The community coming together as part of a sacred practice to curry favor and protection from the gods. And one of these festivals still occurs between April 30 – May 1 as a cultural and spiritual tradition.

“May Day” is a cross-quarter day (midway between an equinox and a solstice) as it is six months past November 1st. According to Norseman’s Codex of Heathenism, “the day was a traditional summer holiday in many pre-Christian European pagan cultures. While February 1 was the first day of Spring, May 1 was the first day of summer; hence, the summer solstice on June 25 (now June 21) was Midsummer.” And even though our modern calendar and seasons are different, we hold to similar themes of the day as observed by our ancestors.

Yep. It’s another fertility fest. Beltane is the Celtic/Gaelic version of May Day. As one might expect, the Germanic people of Northern Europe had their own practices and rituals this time of year. In time, the celebration became known as Walpurgisnacht, and was named after a woman famous for vanquishing paganism in the region.

Walpurgisnacht is named for the Christian Saint Walpurga (710 – 777 or 779 C.E.) who is said to have battled “pest, rabies, whooping cough, and witchcraft.” She became a saint on May 1 (approx. 870. CE), so while her feast day is in February, the May Day celebration is named for her. And not unlike Christmas, Easter, and Halloween, there is a combination of pagan and Christain influences within the holiday.

In Sweden, people celebrate by dancing around a bonfire ( to scare away witches and ward off evil) and singing folk songs. Germans enjoy dressing in costume, making loud noises, and playing pranks (to scare away witches and spirits – hmmm, sensing a theme here). Drinking and cavorting can be a big part of the night. There is a carnival-like atmosphere that carries through from April 30th to May 1st. Fun for all, including the kids. And yes, I imagine there is a bit of prayer and penitence among the faithful following May Eve shenanigans.

And while it’s mostly gone out of fashion, there are those who still participate in the “wrapping of a “Maibaum” or “Maypole” — erecting a tree or pole decorated with ribbon.” Scholars debate the meaning for the tradition with some believing it is a symbol of merriment while others believe it to be a phallic symbol (although according to historian Ronald Hutton, there is little evidence to support this idea). The origin of the Maypole remains a mystery, although there is speculation it is a holdover from the Iron Age through to the Medieval and Early Modern Culture, connecting it to pre-Christian (IE: Pagan) Spring and Summer fertility rites.

Walpurgisnacht: The Night of Witches

For the ancients, May Eve and May Day would have been a time-between not unlike Samhain. A time when spirits walked the land as the veil thinned. But as we know, when the new religion took hold, old beliefs merged with Christain teaching.

So, why would Walpurgisnacht (Nah –let’s switch it to Hexennacht) be a day that as a Witch I may choose to honor? Because I am a Witch! Who cares if the idea originated from those who feared the power of witches? As a 21st century magickal practitioner and spirit worker, I embrace who and what I am. And while I do enjoy the celebration that Beltane or May Day offers, it is Hexennacht (Witches Night – The Grand Sabbat) that appeals to me. Walpurgisnacht: Would You Know More?

There is a lot about Walpurgisnacht to share but this is meant to spark interest and encourage you to check out the information for yourself. Google is your friend. Whether you want to celebrate in the traditional sense or embrace the night as the Grand Sabbat (HEXENNACHT!) you have options. And while I know that social distancing is putting a spanner in the works for a lot of people, that doesn’t mean you have to let this night pass you by (unless you are not feeling it. And that is okay).

So, here are some suggestions for celebrating Walpurgisnacht (borrowed and adapted from OldStyleTales and Day Translations):

Have a Picnic— Make use of a patio, backyard, or spread a blanket in the living room. Eat finger food and have fun. Just make sure to maintain social distance from neighbors, etc., if you go outside.

Hang Greenery — Decorate your doorway, home, and/or altar with garlands and flowers. Choose with the intention of blessing and protecting your space.

Sing Songs — While it doesn’t have to be folk songs it might be fun to learn some, teach them to your children, etc.

Leave Food For the Spirits– Not unlike Samhain, you can offer food (make sure it is safe for local fauna) to wandering spirits, ancestors, Hekate’s dogs or Horde, etc.

Have a bonfire — If you have a place in the back yard then have a bonfire. If you live in a house or apartment which does not have easy access to the outside in these days of social distancing, then light candles.

Dance — Put on those boogie shoes.

Practice Ritual — Honor the accused witches of old from the Burning Times or Salem. And yes, most of those poor souls were Christians (who may or may not have engaged in some type of folk magick). We can still honor them.

Cast a Spell — Figure out an intention and do the work.

The celebration begins at sunset on April 3oth and ends at sunset on May 1st. Revel in being a Witch on Hexennacht (Witches Night, Grand Sabbat, Walpurgisnacht, or whatever) or celebrate your friends who are. Then continue the fun into Beltane.