I'm the creator of Temple Illuminatus, and I just wanted to take a moment to encourage our new incoming members to reach out and introduce themselves.

It doesn't have to be a brilliant essay all about you, it can just be a simple sentence saying hello and giving people a heads up that there's a new person on board.

I encourage you to take time to get to know one another, welcome new members, make connections and friends.

When in doubt, reach out! Don't be shy!

We want to get to know you.

If you'd like to know more about me, feel free to read my profile, and feel free to ask any questions you have about me and about the site.

My Name is Mark Miller I live in Topeka, KS.  I have studied the occult, magick, religions, Left Hand Path for over 20 years.  I have a personal library of over 2000 books many of which are on the above subjects.

Well, I'm Gordon Keirle-Smith, have the feeling I've lived about five or six incarnations in this one (everything from visionary artist to tour guide, theater technician, director of a language school, copywriter, communications coach and entrepreneur) and am now well into writing a trilogy based on writings found under the Antarctic ice in 1962. They tell the story of an ancient civilization existing there tens of thousands of years ago which laid the foundations of all our myths and legends.

This "fabulous fable" is however backed by "fabulous facts", in other words documentary "proof" that all of this is true !!! 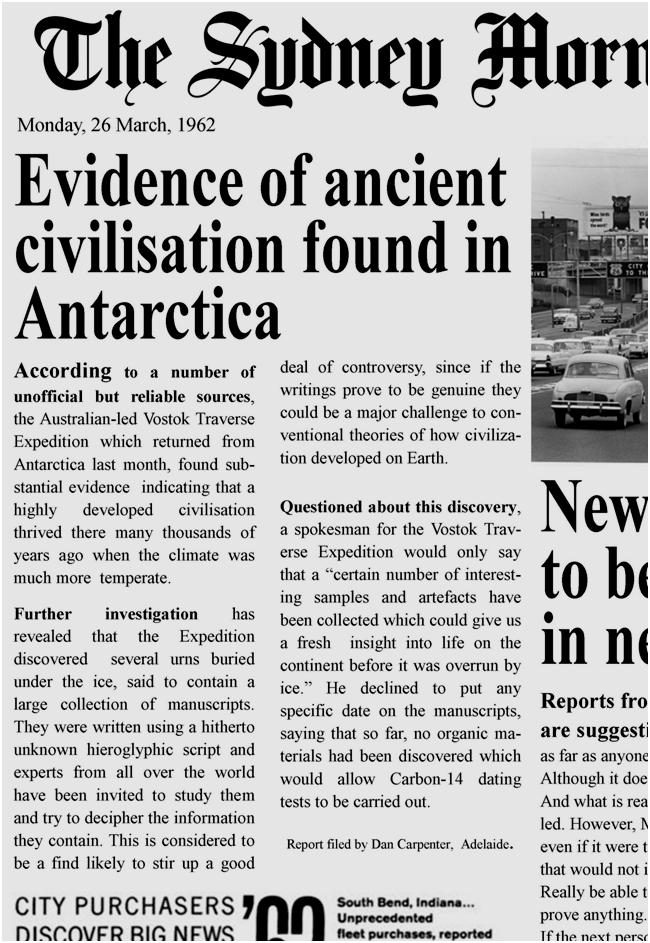 This civilization was unique in that everyone living there had total recall of all their previous incarnations. This had a certain disadvantage though in that they were constantly recognizing others from former lives - and in the end this led to so much celebration that the purpose of their existence in this "Paradise" began to get eclipsed....

That is only one of the many aspects of this multi-faceted book, which include: "forbidden archeology", alternative history, conspiracy theory, allegorical fantasy, past life memory research... and several underlying spiritual truths...

Another example: the "past life" aspects is going to create links with the present when we release the following advertisement (you are the first people I'm sharing this with by the way, it's not the totally final version, but you'll see what I'm getting at...): I actually wrote the first version of this in 1974 but it is only now that I can add all these other multiple aspects and make it into a "meta-realist allegory". Exactly where the line is between the fabulous facts and fabulous fable is up to every individual reader to determine. But there are people who quite seriously tell me that they know in their hearts that it is all true !

Let's say it's designed to open minds. And will, I hope serve several purposes.

If anyone is interested we have a blog: http://www.zandernatis.com. Posted the front and back covers there today so you can see it there....

Hope I haven't taken up too much space/time here.

I am Hunter Moonshadow from Edmonton,Alberta. I've ben a practicing witch for a year or so. A very dear friend told me how the craft helped her and I started readingand leaning. My friend has since passed on but we share a bond still.

Moving on, I want to find more local witches to lean and pal around with.

Hello Jeff, I just sent you an email.

My name is Linda and I'm one of the admins here.  Let's work on those questions.

It's amazing I now look foward to checking and reading email. Before it was the same feldercarb  Ebay, lose weieght fast,increase you size. Now I have Temple mails to go thru and comment if I see fit.

Permalink Reply by 35zcc994vftg4 on May 4, 2014 at 1:37pm
Hello. I'm not sure why I joined...but the forums look to be full of interesting people and topics...had not gone online that night planning to join any forum but here I am. Im terrible at profiles and intros lol...but didn't want to be rude and not say hello. So hopefully this it's okay for the moment...
I'm sure it will be fun getting to know people here. :)

Course that's Ok :-) Happy to have you here!

Hi everyone. I'm Jenny. Don't really know what to say, just wanted to announce myself :)

Hello. I just got here last night. I was introduced by good friend and fellow member Haylee Lynn. :)

I'm here b/c of a passion for gardening and b/c I want to see peaceful coexistence of all Faiths, and this seems like just the place for both. :)