A MUSHROOM EXTRACT MIGHT SAVE BEES FROM A KILLER VIRUS 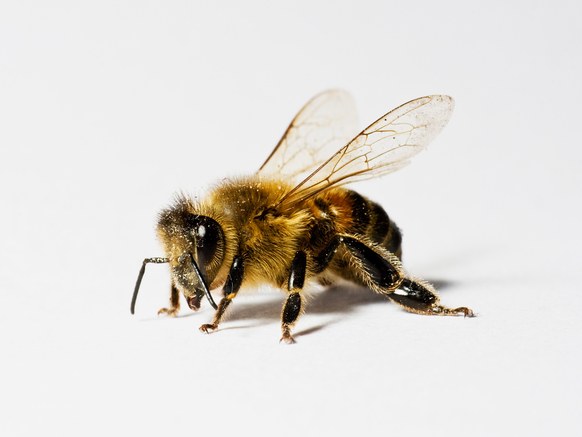 THE BEES, AS you've probably heard, are dying, in massive numbers. Termed colony collapse disorder, the die-off counts among its causes a parasite aptly named Varroa destructor. A flat, button-shaped, eight-legged critter no more than 2 millimeters long, varroa mites invade honeybee hives around the world in droves, latch onto their inhabitants, and feed on their tissues, transmitting devastating RNA viruses in the process.

The worst of these diseases is deformed wing virus, believed to be one of the largest contributors to the devastation of honeybees worldwide. Named for the shrunken and misshapen wings that develop in affected bees, DWV robs its hosts of flight, undermines their immune system, and halves their lifespan. The sicker a bee is, and the more useless its wings, the fewer plants it pollinates. What's more, what flora an infected bee does manage to visit become tainted by the virus, transmitting the infection to future pollinators. As if a bee-debilitating virus transmitted by itty-bitty parasites wasn't terrifying enough, beekeepers currently possess no effective means of battling the virus.

But in a study recounted today in Nature Scientific Reports, researchers present evidence for a surprising solution to DWV: mushrooms. The discovery has implications not just for honeybee populations, but also the food systems, economies, and ecosystems that rely on their healthy activity.

The mushrooms in question belong to the genera Fomes and Ganoderma, better known to fungus fans as amadou and reishi. The former commonly grow on trees, in the shape of a horse's hoof. The latter have long been prized in traditional medicine circles and are a common sight at Asian markets and health food stores. Both belong to an order of fungi known as polypores, extracts of which have been shown in numerous studies to possess potent antiviral properties against dangerous infections like swine flu, pox viruses, and HIV.

"I wanted to see if those extracts had a similar antiviral effect in bees," says Paul Stamets, the study's lead author. A prominent mycologist, the author of Growing Gourmet and Medicinal Mushrooms, and a passionate proselytizer of all things fungal (his TED talk, "6 Ways Mushrooms Can Save the World," has been viewed millions of times), Stamets has long suspected that bees derive some benefit from mushrooms.

He recalls a scene from his backyard in July of 1984—the first time he noticed bees from his personal hive flying back and forth to a pile of fungus-coated wood chips. The bees, he says, were sipping droplets of liquid that had oozed from the mushroom's mycelium, the fuzzy white network of cobwebby filaments through which fungi absorb nutrients.

At the time he figured the droplets contained sugar (fungi break down wood into glucose). "But then, a few years ago, I had an epiphany—a waking dream, actually, " Stamets says. What if the bees were getting more than a shot of sugar? He began to wonder if they were in fact self-medicating.

That question led him to Walter Sheppard, chair of the entomology department at Washington State University and one of the world's leading experts on bees. With the help of researchers in Sheppard's lab and the US Department of Agriculture, they have spent the past several years dosing sugar-water feeders with extracts from the mycelium of various species of mushrooms and analyzing the effect on infected bees.

In both indoor experiments and outdoor field tests, bees that fed on mycelium extracts fared significantly better than those that drank only sugar water. In caged bees infected with DWV, the researchers observed an 800-fold decrease in virus titres (a measure of the level of virus in the bee's system) among bees dosed with amadou extract. The effect was less powerful in the field, which are less strictly controlled than lab trials—colonies fed reishi extract saw a 79-fold reduction in DWV, those fed amadou extract a 44-fold reduction—but the results were still highly significant. (In other field tests, bees fed reishi extract saw a remarkable 45,000-fold reduction in Lake Sinai virus—another disease ravaging honeybee populations.)

"It's shown a strong effect, stronger than anything I've seen," says geneticist Jay Evans, head of the USDA's Bee Research Laboratory, which analyzed the virus levels. Stronger, even, than RNA interference, another promising—but expensive—approach to fighting bee viruses that Evans himself is investigating. "I'm a little jealous," he says.

Stamets has received numerous patents on the extracts in the past year, and he plans to sell them on his website, fungi.com, a domain he says he has owned since 1994. "I'm not in this for the money," he says. "I walk my talk, and I use my business to fund further research."

More studies are always a good idea—especially for something as seemingly effective as these extracts. For one thing, it's not clear whether they will help rescue bee colonies long-term. Stamets' field studies took place over two months, in the summertime—but the hardest time of year for bees is winter. Future studies will need to examine how other colonies fed the extracts fare over six months or more, and how many survive that cold and deadly season.

It's also not clear how these extracts reduce the virus titres in infected bees. They could be boosting the bugs' immune systems. Or inhibiting the virus directly. Or affecting the way it replicates inside the bees. Or it could be something else. Whatever the mechanism, it'd be useful to understand it more fully before deploying the extracts on a wider scale. After all, there are also unforeseen consequences to consider.

"Whenever I hear about something like this, I immediately think of the risks and drawbacks," says Lena Wilfert, an evolutionary ecologist at the University of Ulm in Germany who studies the spread of viruses among honeybees. Of the known viral pathogens affecting the insects, she says, DWV poses the greatest threat of all, so she appreciates the potential benefits of powerful virus-nerfing agents. "But any time you apply a medication at large scale, you're going to have potential for resistance evolution in the thing it targets." Those questions have yet to be probed.

"We have to prove all this, you know? And thankfully, I've become more disciplined as a scientist, being around other scientists," says Stamets, who acknowledges that there's much more work to be done. "We're doing tests right now in several hundred more beehives. We're ramping up."