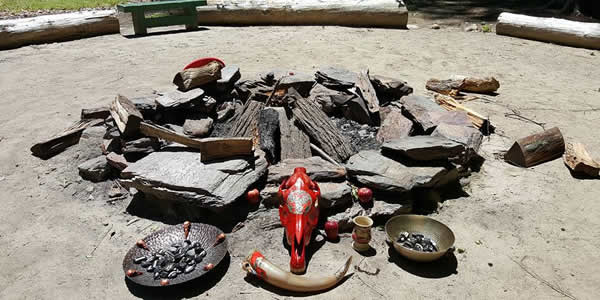 There is probably no more personal expression of someone’s spirituality than their altar, whether that altar is a single candle or cluttered table top, a temporary found spot or a permanent location, whether its something prescribed by tradition or built piece by piece out of imagination. Our altar is not only a place to connect to the Gods and spirits but also a place where we communicate with them in imagery, scent, touch, and symbolism, as much as in words. I know my own altars are highly personal and while I find them beautiful and evocative some other people find them macabre or even inappropriate. And that doesn’t bother me at all because I know that my sacred space is a place for me and not them, and that if it speaks to me and serves its purpose then that’s ultimately all that matters.

I have seen a huge variety of different altars over the years, and they all reflect their owner’s aesthetic. Even the community built ones are mirrors of the people who built them. Looking at someone’s altar is like looking into their spirit, in a way, and it can tell us a lot about them but only if we are willing to listen and to put aside our own filter. That sounds easy but it isn’t always, because we all have our biases, our preconceived notions, and our assumptions about what is right and wrong. You may not think this would intersect with altars but it does in many ways. I know the first time I saw a simple decorated stang stuck in the raw earth it took me a bit to adjust to thinking of it as an altar. In the same way, although I have some old mined crystals from many years ago and some that were gifts I strongly prefer natural stones that aren’t the product of strip mining and seeing altars covered in such mined crystals does make me uncomfortable; which means that I have to put aside my own bias in that case and acknowledge that what doesn’t work for me does work for other people.

I titled this blog “decorating with death” because that is an apt way to describe my altars and perhaps my approach to the sacred more generally. Not everyone is comfortable with this approach, and the responses range from people feeling horrified that I would use animal parts to amused for the same reason. To address the second response first – yes I am aware as someone who is part of the Goth subculture its a bit stereotypical for me to have skulls and animal parts in my sacred space. However that doesn’t invalidate their spiritual value for me, and ironically I did not have this focus for the first 20 years or so of my spiritual practice. It wasn’t until my focus overall shifted more solidly to the three Morrigans, Odin, and the liminal Gods that I found my altar shifting to include more items like skulls and bones. Also as I became more interested in the practice of traditional folk magic I found that animal products, including bones, feathers¹, snake skin, and the like became more and more common on my shelves. Getting back to the first point, well, while I do respect that many people have ethical objections, including those rooted in their religion, that preclude harming animals or using animal parts I don’t share those and am not held to them. I wear leather and eat meat so it would be hypocritical to act as if I am not willing to use animals in ways I believe are beneficial to me, but I do make an effort to ensure that everything on my altar and that I use magically is wild sourced (i.e. is from a wild animal that died naturally) or is otherwise obtained from ethically and legally.

Let’s just be clear by the way, if you’re thinking using skulls and bones and bird parts is going to earn you witchcraft street cred you’ll be sadly disappointed. Let me clue you in now, if the last paragraph didn’t do the job, the fastest way to freak people out in a bad way and to get made fun of is to talk about this subject. Obviously I don’t care or I wouldn’t be writing this, but I don’t want to give anyone the impression that running out and buying the first skull you find  and plopping it on your altar is going to impress anybody.  If you don’t have a real spiritual reason for it and more importantly if the object itself doesn’t have spiritual significance and value to you then maybe look at finding an item that does and adding that to your space instead.

So why do I include these items on my altar?

I had always included a couple furs on my landspirit altar, mostly of animals found in my locality. I felt that it was a way to honor those animals as a part of the spirit of the land here. When I first started practicing seidhr about 10 years ago I was looking for what to use as a veil, because veiling is commonly done during the oracular practice, and I was told in a visionary experience that instead of a cloth veil I should use a bear skin. Finding that ended up being quite the quest in itself, and probably a story on its own, but suffice to say that I came to understand later why it had to be a bear and the bear itself came to be very significant. The bear has become part of my landspirit altar as well, and has helped me to connect to the spirits of animals that I used to fear in real life.

When I began connecting to and working with the liminal Gods I wanted to use imagery to represent them on their altar, but it quickly became apparent that statues just didn’t feel right. I found some artwork that was passable but that wasn’t quite right either. Eventually after some extensive meditation I was shown a kind of rotating imagery, of a black wing and antlered skull for the Gods of the Dark half of the year and of a doe’s skull and pheasant wing for the Gods of the Light half of the year. As with my bear these were not easy to find, but finding them became a part of the process, and made me value them more.

Connecting to the Morrigan, and especially Macha, I found from the beginning that I was suddenly drawn to skulls, especially raven and crow skulls. I had no reason for it initially, it was just an impulse, a connection I felt when I saw them. Initially this was in jewelry and one of the first pendants I ever got that was dedicated to them was a silver raven skull. Later, as my dedication to the Morrigans deepened, it seemed that skulls started finding me and I began to wonder if it was related to Macha – its said that the severed heads of warriors are her nut crop and the more I thought of that the more comfort I found in the imagery of skulls. They stopped representing death to me and became symbols of victory and of the vessel of the soul. I think for me as well the bones serve as a reminder that whatever else the Morrigan are to me they are also deities that do not shy away from death, change, and hard truths.

Each one is its own story, but they give you some general ideas. Each is a reason for why that particular item was added, but also more generally why things over the last 10 years have shifted to where they are now.  There was no single moment when I just decided to change things to this or to embrace an aesthetic that emphasizes death, but at the same time looking at it now I am glad it is what it is. I look at my altar and I am reminded that life is about transition and that sometimes that transition is from this life to another. 4 and a half years ago I almost died and 3 and a half years ago I almost died again – not hyperbole just reality. Looking at the sacred symbols on my altar I see that there is power and presence even beyond this mortal life, and I find that comforting. Also as an animist each one is a connection to a spirit, and working with spirits is an important part of my witchcraft as well.

No two altars are ever exactly the same and I think that’s a good thing. Firstly because it would be boring if the world was filled with identical cookie cutter things, even in religion. But secondly because I think that altars should be places that have that personal element to them, they should speak primarily to us, to the person or people who created them. What works for one person may leave another person cold and uninspired and what does nothing for one person – even makes that person uncomfortable or unhappy – may be exactly what another person needs. I hate twee, but twee may be exactly what someone else needs to feel connection to the divine. Many people fear or dislike imagery connected to death, including bones, but for me they represent connections to the spirits and Gods. We each fashion our own language out of symbols and objects which speaks as loudly as our voices, both to ourselves and to the Gods and spirits, and there is real beauty in that. We just have to learn to see it and to appreciate both our own and other people’s even when theirs is vastly at odds with ours – we are all ultimately seeking the same sense of connection after all.

***Before anyone jumps to comment about this – I am very well aware of the Migratory Bird Act, and am extremely careful to source any of my feathers or birds parts legally, which usually means from birds not covered by the act or imported from other countries.