You may be wondering what epithets are. I considered calling this article, “WTF are epithets and why you need to use them in witchcraft” because I really do feel that epithetical practice is a key for deepening our spiritual practice and ramping up our magick. However, it can be off-putting if you’re new to using them. I can’t even remember how I got started using Hekatean epithets, and I can’t imagine practicing witchcraft without them. They are potent evokers, connected to deep forces, and excellent for expanding my understanding. Epithets can be used to craft wicked spells and expand consciousness. 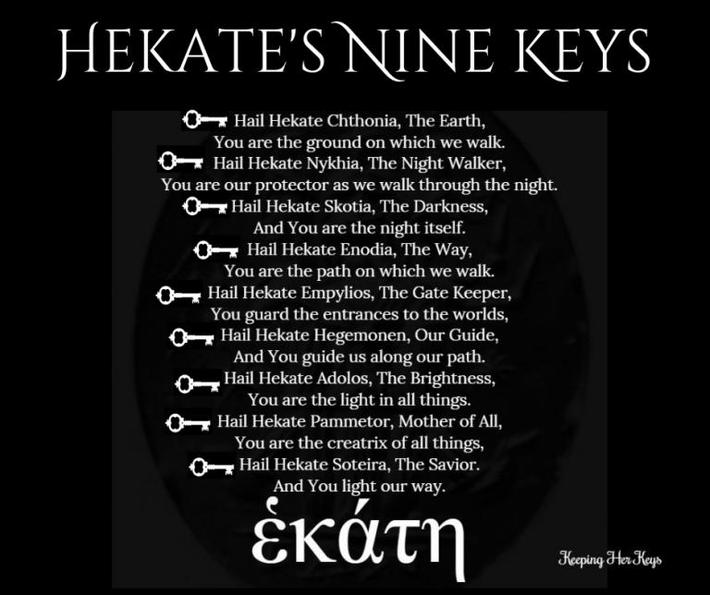 Words are power to the witch. They evoke certain energies and spirits, carrying with them a trail of magic. Summoning characteristics that are associated with archetypal aspects of animals and other creatures are common practices in a variety of cultures and traditions. Sometimes, this is accomplished through taking on the physical appearance of the creature, like in the image. However, the words themselves – like “fierce” or “strong” – can also summon such powers. Salty, seductive, mysterious and dangerous. This is how I experience Hekate Einalia, Goddess of the Sea, one of my personal power epithets for my favored goddess. This poem is an example of replacing the proper name with an epithet. The epithet is so connected to the spirit being evoked that their actual name or title isn’t necessary.  Hekate: Goddess of the Sea

Epithets are words used to describe aspects of a person, spirit of deity that can be used for personal, spiritual and magical practice. These descriptive terms are thought forms, containing great power through their connection to the energy associated with them. In Modern Hekatean Witchcraft, epithets are used to evoke and invoke specific aspects of Hekate, spirits and forces. For personal practice, epithets can be used to enhance existing abilities and characteristics through intentionally summoning the energy of the characteristics.  Epithetical spiritual practices include chanting certain ones to connect to their energetic signatures and using them in ritual. In magical practice, these words are woven into spells and other witchery to cast their power into our intentions. Epithets are concise descriptors of attributes and powers associated with Hekate, such as when I determined that, in 21st century vocabulary, she is a Goddess of Relationships. 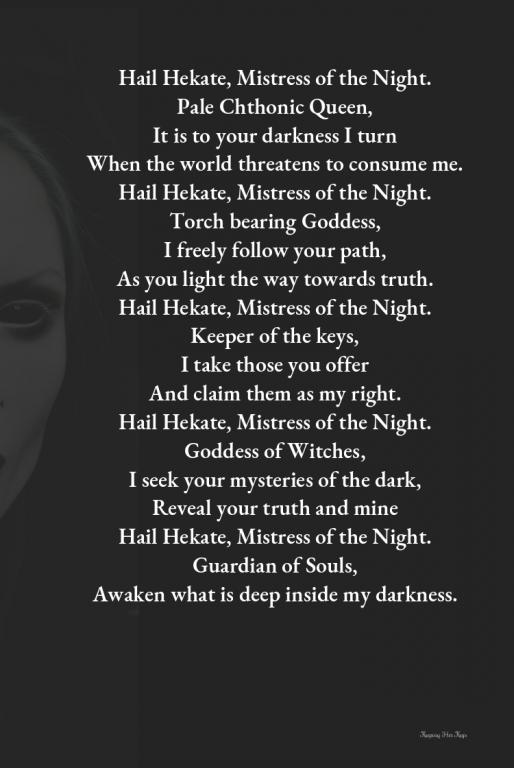 “Pale Chthonic Queen,” is an epithet that speaks directly to my heart as does “Mistress of the Night.” I wrote this on one of my beloved foggy nights when the world becomes a damp velvet womb, with the roar of the ocean like the sounds heard in utero.

Historical writings about Hekate often used animal epithets to describe her attributes. For example, she is often described as bullish, from being Bull-Faced (Tauropos) to the Bull-Dragon (Taurodrakaina) in the Greek Magical Papyri. You can read more about her animal epithets here. When ancient writers and practitioners used these terms, they were both describing characteristics and evoking their power.

The use of epithets extended far beyond animals, including numerical associations, personality characteristics, and honorifics. You can find a lengthy list of Hekatean epithets here.

In fact, there are well over 200 known Hekatean epithets derived from ancient sources, from Angelos (Messenger) to Mormo (She-Monster). There are the more widely known ones, including Torchbearer and others associated with the Underworld.

While the power of these historical terms is undeniable, creating new appellations that hold meaning in the here and now empowers us as practitioners of Hekatean Witchcraft. I’ve written about Hekate as Goddess of the Marginalized, for example. Epithetical practice should be a living, current approach and not entirely based in the distant past. Historical numerical epithets associated with Hekate reflect the deeper meaning of the number. Perhaps the most commonly associated number is three, reflected in many images and statues showing her as three-headed or three-formed. Sometimes the heads are animals, including cows, dogs, bulls, and boars. Three, in particular, was associated with power and prescience.

I’m not taking you on yet another tour through Hekate’s 3,000 years of history simply because it’s fascinating (at least to me), but to illustrate that epithets have power. They are evocative thought forms in modern witchcraft parlance. While the historical ones certainly still resonate today, there are other modern epithets associated with Hekate. Notably, “crone” has become associated with her in certain circles, although not for me personally.

Read more about why different views on Hekate are important here.

There are several Hekatean Witches’ writing about the ways they use epithets in their very modern approach, such as this article where The Corner Crone discusses a ritual for evoking and invoking epithets. Hekate as a Goddess of Consent, using the epithet of Synkatathsi, is discussed in this blog. Another example is this very personal exploration of Hekate Geneteira, including the evocative power of Florence + the Machine. I’ve written several articles exploring both historical and purely contemporary epithets, including my take on Hekate as Mother of All.

I frequently get asked about the epithets, and when I was recently, I decided to make a video explaining epithetical practice. I ended up making two separate ones. In the first, I talk about epithetical practice within Modern Hekatean Witchcraft, and in the second, I get into ways to use them for personal, spiritual and magical practice, including divination.