Chutes and Ladders Began as a Game to Teach Morality 2,000 Years Ago 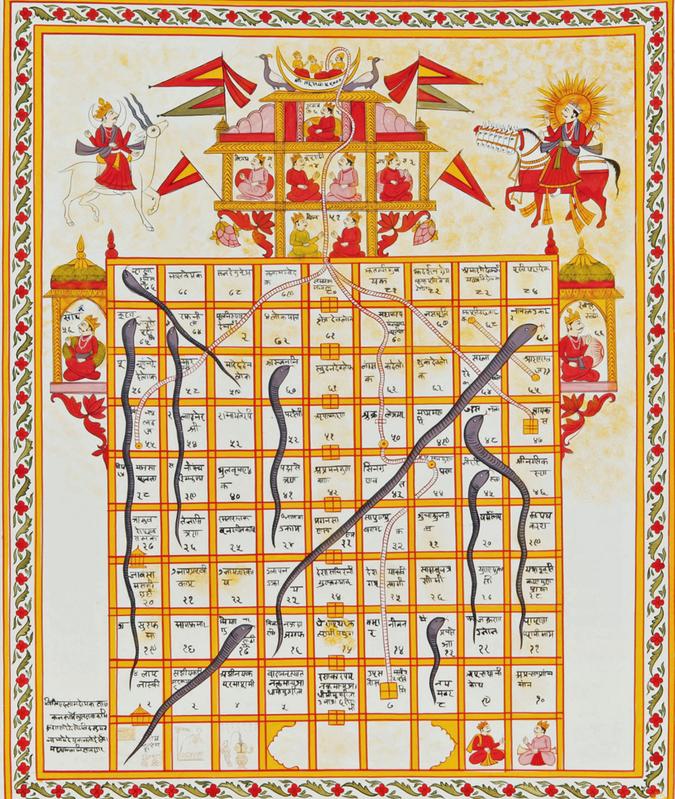 Jain version Game of Snakes & Ladders called jnana bazi or Gyan bazi, India, 19th century, Gouache on cloth
Wikimedia Commons
Chutes and Ladders is originally based on a game called Snakes and Ladders, which dates back to ancient India in the 2nd century B.C. This game was a tool to educate children on traditional Jain and Hindu philosophies (although Islamic, Buddhist, and other versions of the game also existed), especially teaching karma and kama, or destiny and desire. Gameplay mechanics taught the concept of destiny or fate via the random, luck-based spinner or die roll used to determine movement, while desire was conveyed by the snakes and ladders.
The game also taught a moral lesson by representing the karmic cycle. The final square represented moksha (liberation or salvation) from samsara (the cycle of death and rebirth). A player would reach this point by climbing ladders (which represented rebirth into higher forms of life by doing good deeds) and falling down the board via snakes (which represented rebirth into lower forms by doing evil). Certain versions of the game pushed the moral and religious teaching even further by including religious or spiritual meaning in the size and shape of the board itself, the number of the final square, and the specific placement of the virtues and vices.
Ancient iterations also featured fewer ladders than snakes, as a reminder that a path of good is more difficult to follow than a path of sins. Specifically, one early version of the game contained 5 ladders (asceticism, faith, generosity, reliability, and knowledge) and 12 snakes (disobedience, debt, drunkenness, greed, lust, lying, murder, pride, rage, theft, vanity, vulgarity). Game of Heaven and Hell (Jnana Bagi). Each square has not only a number but a legend which comprises the names of various virtues and vices. The longest ladder reaches from square 17 'Compassionate Love' to 69 'The World of the Absolute.'
Wellcome Images/Wikimedia Commons

The Moral of the Story

The underlying ideals of the game inspired a version in Victorian England in 1892, which replaced the Indian virtues and vices with Victorian, Anglican, and Protestant doctrines of morality. Squares of fulfillment, grace, and success were accessible via virtues like industry, obedience, penitence, punctuality, and thrift. Squares of disgrace, illness, and poverty, on the other hand, were the results of vices like disobedience, frivolity, gambling, indolence, indulgence, and quarrelsomeness. The number of ladders also increased to equal the number of snakes, signifying the cultural ideal that for every sin a person commits, there exists another chance at redemption.

Much of the décor and art of the early English boards of the 20th century reflect the relationship between Britain and its imperial possession, India. You can actually see versions of the game reflect history as British rule collapsed — very few pictorial references to the Indian culture survived past India's independence in 1947. That's why physical allusions to religious and philosophical thought in the game as presented in Indian models are rare in today's iterations of the game.

Milton Bradley brought the game to the U.S. in 1943 and introduced it as Chutes and Ladders. It retained a surprising amount of metaphor consistent with every previous iteration of the game, and was yet again adapted to match the needs of its culture. The moralistic tone is more subtle, with an emphasis on child-friendly good deeds (like mowing the lawn, saving a cat from a tree, and eating healthy) and bad deeds (like eating too many cookies, drawing graffiti, and not studying).

Today, the game is still being adapted as an educational tool, with new versions being designed to educate people about climate change, help medical school students get excited about learning, and create awareness of the habits that can lead to and prevent encephalitis. Chutes and Ladders just goes to show how much our culture can influence our interpretation of any art — including even the simplest board games.